The success of any company is measured by its sales first and the extent of its influence on the user and its attraction to him. Second, Apple was successful in these two factors to the extent that it was ranked second in the world in terms of the number of sales despite the lack of diversity in its phones and also despite the fact that its phones are expensive and may not be suitable for everyone. But what happened is that Huawei suddenly came and removed Apple from its place! What are the details of this story? Why are we talking about it now?

For years, Apple remained in control of the second place in terms of sales of smartphones (or the number of charged phones annually) while the first place is reserved for Samsung, which combines quality, diversity and the Android system as well, and this situation was excellent, whether for Samsung or Apple, and life was rosy for them, this Until the second quarter of 2018 came, at which time Huawei outperformed Apple for the first time and occupied its position. 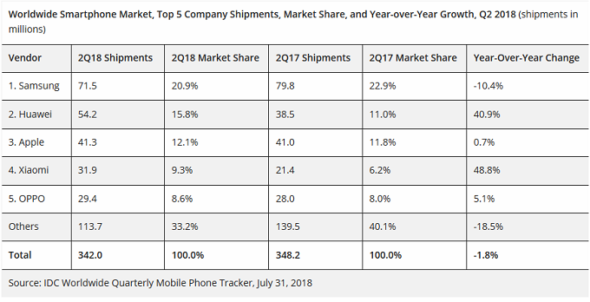 Here, Huawei’s real threat to Apple appeared - and perhaps Samsung as well - except that the fate has bothered Apple and ended 2018 and Apple is still in second place in the world with total sales for the year - Huawei managed to surpass Apple in the second quarter sales, but the first was Apple superior and the total year outperformed Apple - but The difference between it and Huawei was very minimal! Perhaps the iPhone XR is the reason for Apple's survival! As you can see in the following chart, the difference between Apple and Huawei is very small, while the graph shows a terrible development for Huawei compared to last year, as its sales increased from 153.1 million devices to 205.3 devices against 206.3 million devices from Apple.

To complete the graphs and the share of physics that we started, we share with you another graph that expresses the number of companies' shipments of smartphones divided by quarters: 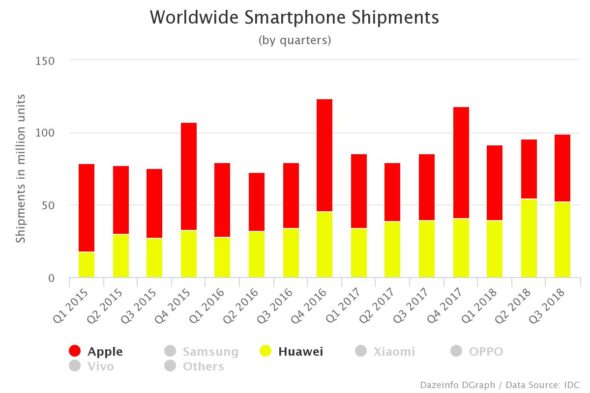 Since that time, Huawei is in second place in the quarterly statistics, and it remained there until the hour of writing this article, and you should note that what helps Huawei in this is that it releases a new phone every day, so it is able to sell more phones.

What is the situation now?

One of the most exciting information about this story is that once Huawei took the place of Apple, analysts did not study the possibility of Apple returning to its place again, but instead studied the possibility of Huawei taking the Samsung center as well - which is the first - this given that Huawei was really brilliant in This period, up to the first quarter of the current year.

The wind never comes what the ships desire, as Huawei, while it was brilliant and no one is able to stop it, Trump came and put it to the ground, as the American ban was imposed on the company and later it was denied the use of Google's services and products along with a number of other American companies, which wrote the confirmed failure. For the latest Mate 30 phone, which is what Huawei actually recognized when it made its new phone exclusive to China.

While Huawei is burning in the midst of the fire, Apple launched the iPhone 11, which has achieved great success so far, which made Apple announce its intention to produce an additional number of units for the sufficiency of the market! As you can see, Huawei deteriorated at the same time as Apple flourished, which confirms that Apple is now on its way to regain its position again. 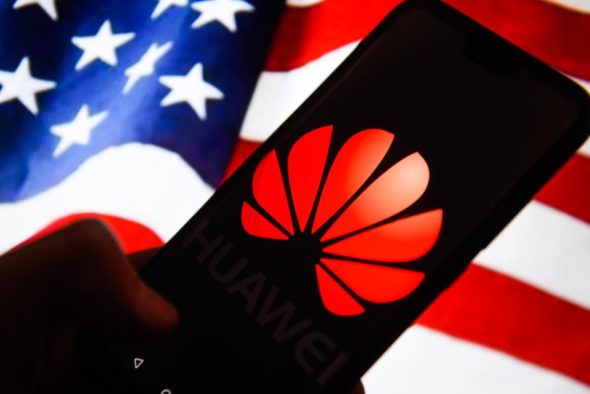 Apple is on its way to reclaim its position

After this Huawei problem, everyone expected that sales would collapse, especially for new devices such as the Mate 30 Pro or even for old devices, due to users' fear of Huawei devices and losing support for the Android system! This made analysts in the Taiwanese daily newspaper expect Apple to return to its previous position easily between October and December, which represent the fourth quarter of this year.

On the other hand, apart from the Huawei problem, Apple's position has improved significantly due to the great demand for the iPhone 11, which prompted Apple to increase production by 10%, as we heard in recent days, and among the things that will help Apple also is the launch of the iPhone SE 2 Expected in early 2020.

The return of the quarter only! 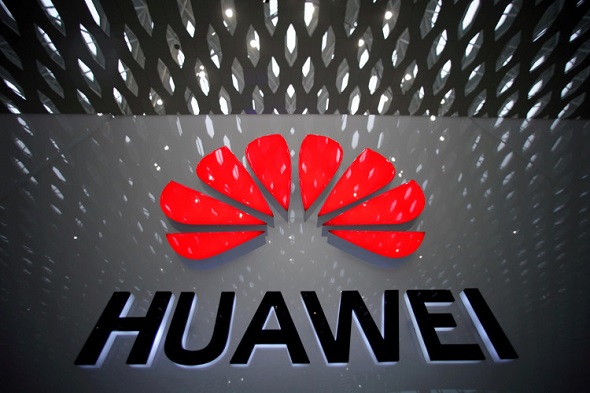 Huawei announced a few days ago about a big surprise, which is the arrival of its sales for the first 9 months of 2019 to 185 million devices, up 26% from the first 9 months of last year. The number is very strange and has made some analysts consider how this happened. In the first 6 months, Huawei had announced the sale of 118 million devices, an average of 59 million every 3 months. Sanctions and disagreements with America began in May, that is, effectively, their impact will appear from the third quarter; But the company is announcing the sale of 67 million in the third quarter !!! Also in the first half, it achieved $ 58.3 billion in revenue, an average of $ 29.15 billion in the quarter. Now Huawei announces revenue of $ 27.7 billion. In other words, the company’s sales increased as the number of phones increased, but as a value it decreased, and this suggests that there were offers and discounts, as well as weak network sectors, for example.

Despite the previous data, it is expected that Apple will come in the last quarter (October - November - December) in second place and return to its position. However, overall sales for the year will be in favor of Huawei and it will take second place on an annual basis. Will Huawei be able to continue to maintain second place after depriving devices of official support from Google, the software store, and Google services? In theory, this is difficult and almost unlikely, but we will see what the days say.

Here we end and this is the story, what do you think of what is happening with Huawei now? Do you see that Apple will return to second place?