Believe it or not, sometimes Samsung, Xiaomi, Oppo, or Huawei can provide new innovative technologies in their phones, but at the same time Apple cannot provide them for a year or two, for example! And we are not talking here that Apple is "stingy" and does not want to provide it; But we say you cannot provide it in the first place. Why? Follow us and find out the secret. 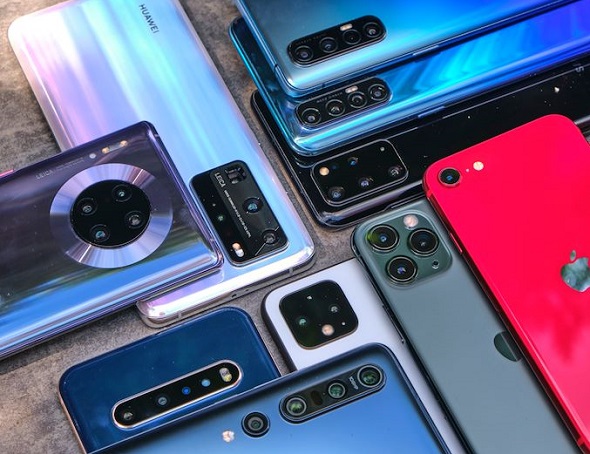 When a new technology is announced in the world of smartphones and then we do not see it on the iPhone, then the interpretation is usually one of two:

1 Explanation of Android users: Apple is a stingy company that does not want to provide the latest technology; It wants to sell old technology at a high price and make huge profits.

2 Apple fan interpretation: This technology is incomplete and not suitable for the Apple ecosystem, and Apple will wait a year or two for the technology to mature and then advance.

Both explanations are logical and do happen; But this time we are talking about another third point; A third option that sometimes occurs may be the cause.

Apple has a design department, not a manufacturing department. That is, Apple's team designs the outer cover of the iPhone and then sends the factories a request to manufacture this cover; The team designs a battery with specific dimensions, then companies supply this battery to Apple and so on, that is, Apple does not manufacture products by itself ... Apple in the past had its own factories until Steve Jobs returned to Apple in 1997, who then appointed Tim Cook as Apple COO And he was asked to solve the manufacturing problem at Apple, so Tim Cook's decision was to close the factories; Yes, Tim applied the popular proverb, "It is easier to buy a slave than to raise it." And Tim has established a huge network of supplies where Apple obtains phone parts from different companies, such as a screen from Samsung, a camera sensor from Annie, a processor from TSMC, a memory from SanDisk and Macron, and so on, and he sends everyone to Voxon or Pegatron to assemble the phone.

The world of smartphones is classified into 3 categories, which is the economic sector, meaning the phone is less than $ 150, then the middle class, which is phones between $ 150 and $ 400, then the higher “premium” phones, which are phones of more than $ 400. There are some research centers prefer to make a fourth segment, which is the flagship phones above $ 650, but we will choose the broader classification, which is $ 400.

◉ The top category of "premium" phones achieves annual sales of 300-350 million selling phones, and Apple can grab a share in it between 200-250 million, meaning we can say an average of 60%. A counterpoint research report said that the share of Apple in the first quarter of 2020 in the upper category was 57%, followed by Samsung 19%, then Huawei 12%, Oppo 3%, and Xiaomi 2%. As a reminder, the first quarter did not release a phone in it. The same report said that the 5 best selling phones in the world are the iPhone 4 of them. Another report said that the top 10 best-selling phones in the world during the first 6 months, the iPhone had a share of 5 devices in them. As for the ratings that look at phones more than $ 800, you will find that Apple has received up to 80% of the global market in this area. 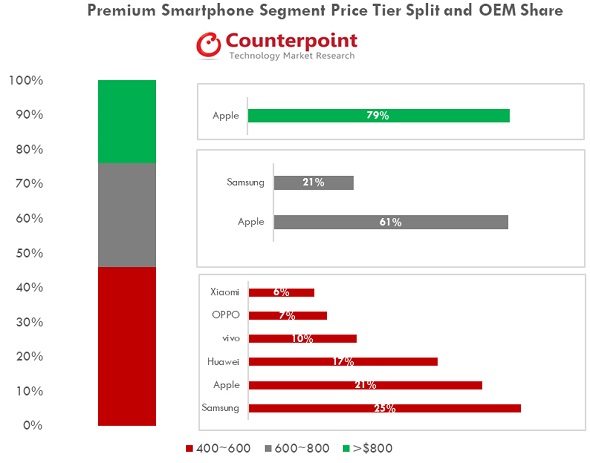 Looking at the figures for the first quarter of the year, we find that 70 million flagship phones have been sold, including Apple's share of 40 million, Samsung 13 million, Huawei 8 million, Oppo 1.2 million, and Xiaomi's 0.8 million.

◉ Moving to the famous phones, we find that Huawei said that in 2019 the sales of the Mate 20 family and the P30 family together (including the medium Lite version) totaled 37 million phones.

◉ As for Samsung, we find that the S20 family achieved sales of 8.2 million in the first 3 months of the launch .. The interesting thing is that the number 8 million, this was reports that Apple, after the release of the iPhone 11 (not Pro), asked factories to increase its production 10% and the reports estimated this 10% as 80 million phones. That is, Samsung sells in 3 months of the most important phone the S20 has, which Apple decides to increase its production of its phone. 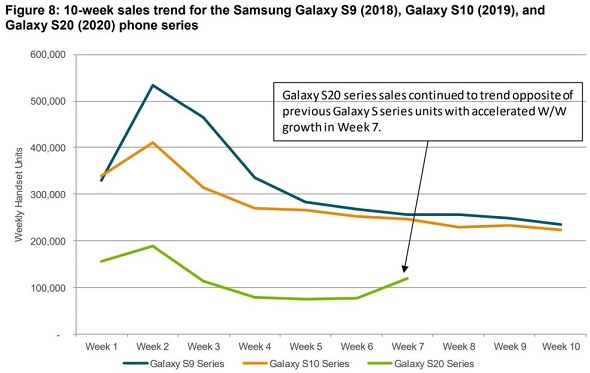 We apologize if we made you bored with this long introduction, but it was important to clarify the problem for Apple.

Sales magnitude is a problem

Believe it or not, the sheer magnitude of Apple's production and sales of upper-class phones is sometimes an obstacle to the introduction of technologies. Imagine with me that a company revealed a wonderful technology and Xiaomi decided to add it in its top phones. How much does Xiaomi sell “average” of the most expensive devices per month? Average of 300K devices. Xiaomi sends an order to the factory. We want 300 thousand pieces of this innovation. And the factory provides them to Xiaomi and see the technology. Imagine with me that Apple liked the same technology and wanted to launch the same technology; Do you know how much Apple sells in the month of launching the phone? An average of 25 million phones, then the average gradually decreases to an average of 10 million iPhones per month. And here is the problem; Factories do not have production lines capable of meeting Apple's demand. 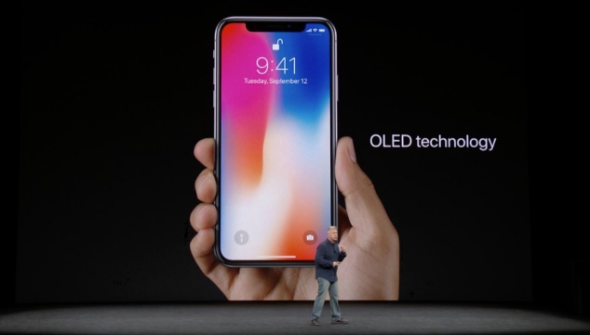 And so as not to be accused of imagination, to see a realistic example that actually happened .. OLED screens Apple is convinced and decided to add them in its phones. Here, Apple requested tens of millions of screens with specific specifications that always make the iPhone screen win the title of the best OLED screen in the world. Sharp, LG, and Japan Monitors told her they couldn't manufacture that much. By going to Samsung, the largest manufacturer of OLED screens in the world, Samsung agreed to manufacture, but placed a penalty clause against Apple; The idea that Samsung will spend billions to enlarge factories to receive Apple orders; If the request came less than a specified number, Apple will pay it compensation, which has already happened, as it was reported that Apple's orders from Samsung in the second quarter of 2020 were less than the minimum, so Apple paid $ 950 million Compensation to Samsung.

Have you now clarified the problem? Imagine with me that Apple wants to convert iPad Pro into OLED screens; The whole world might not sell 1 million tablets with OLED screens and so factories operate with this capacity; Suddenly Apple tells them we want 10 million screens. 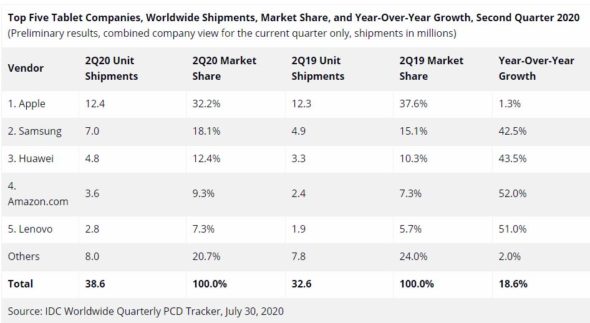 In the manufacturing world, it's not easy and you can't run a motor more quickly to get more devices. Let us continue with the same example of OLED, as Apple, when all factories were unable to supply it, had to resort to Samsung. But reports spoke that Apple decided to support LG in 2017 with $ 2.7 billion in order to expand factories. We are now in 2020; Reports now say that LG may only supply 10% of Apple's OLED display needs. Have you now imagined 3 years and billions of dollars, and a company the size of LG could not fulfill Apple's requests!

Another example is the problem of America and China; Trump imposes heavy taxes on Chinese products; Can Apple request to transfer its phones to 200 million to be assembled outside China? This is not possible because there are no factories outside of China that can assemble so many groundbreaking devices. The news finds that Foxconn will invest $ 1 billion in factories in India and expand its factories in Brazil and elsewhere. Years until you can move the iPhone industry abroad. Imagine with me that Google wants to move the pixel phone assembly outside of China How much does Google sell monthly? Almost 600 phones; It's simple, but moving 10-15 million iPhones and iPads abroad a month is difficult. 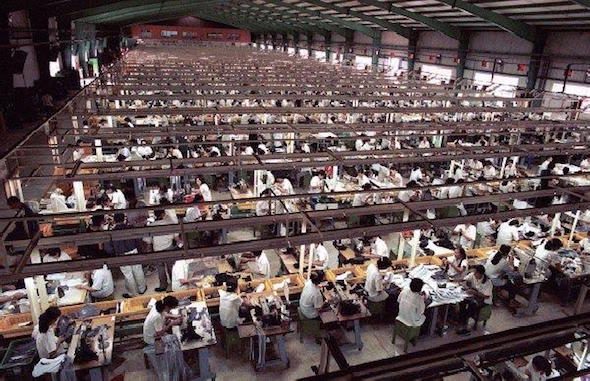 When a highly advanced technology is revealed, the factories' ability to supply it is weak and scarce; Maybe 1-2 monthly example; This number is suitable for high-end sales in Huawei, Xiaomi, or Oppo, for example; But this production capacity is not suitable for Apple's order volume; Apple requests that it expand its product lines to accept Apple's requests. Dozens of times we see news of manufacturing problems because the suppliers are running short. Have you ever seen a phone other than the iPhone, the news says that there is a shortage in the supply factories to cut it! Only iPhone; Because here we are not talking about traditional hardware that sells for hundreds of millions. It's Hi-End Hardware. 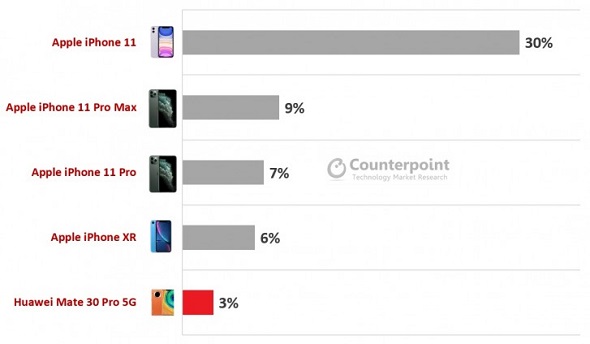 We hope that the idea of ​​obstacles to huge production has been clarified; We repeat that this does not negate the points mentioned at the beginning of the article, but we only say that the reasons are not only 2, and there are other reasons for delaying the provision of technologies.

And tomorrow we will see a delay in the launch of the iPhone 12 for the same reasons; Factories are unable to meet the volume of demand.

Have you ever thought that the magnitude of Apple's production might be an obstacle to adding modern technologies? Do you know other reasons for being late in providing some advantages with equipment? Share your opinion in the comments