For the first time in nearly 15 years, the newer MacBook and Mac mini devices don't come with Intel processors. Instead, Apple used the all-new M1 chip, which was done Disclosed yesterday As a strong alternative to Intel processors that have been running on Apple devices since 2006, learn about this chip in some detail. 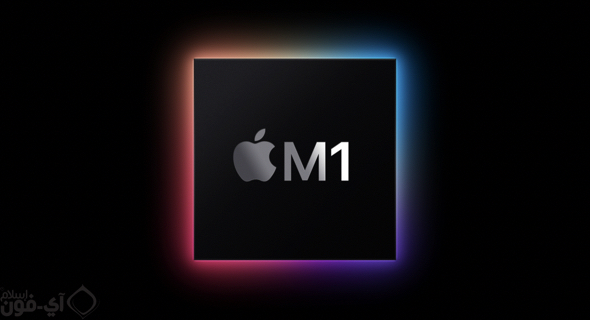 The M1 is a complete system in one slide 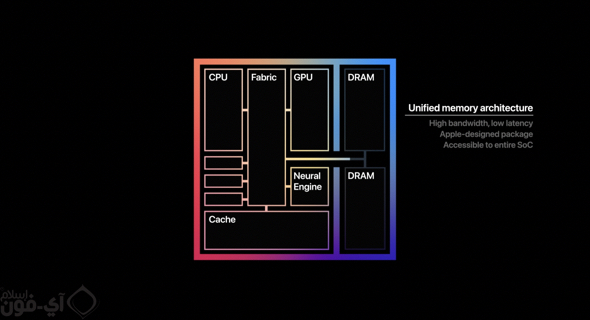 Whether this chip works on Windows, macOS, or Chrome devices, it contains a set of components inside and each deals with different tasks, including those used for browsing the Internet, opening and closing applications, as well as the graphics processor, and much more, all of this. Within a single chip it is called the "CPU".

In large, powerful machines like Workstation computers and game consoles, the CPU and GPU are completely separate and each has a separate place on the motherboard. Smaller laptops usually combine the CPU and GPU into a single component using what's known as integrated graphics processing, along with the rest of the computer components, in different places on the motherboard.

As an evolution of Apple processors A series Which has always worked on operating the iPhone and iPad, the M1 chip takes a different approach from computers and closer to phones. Instead of a set of separate processing parts, it is a single system on a "SoC" chip, or what is known as System on a Chip, or all in one chip . The SoC handles all mathematical operations, including graphics processing, which means every code can use the most efficient part of the M1 processor.

And because it has to do everything at once, the M1 processor has more cores, up to 16 (total), compared to the six found in the most powerful Intel laptop processors.

In fact, the M1 processor contains many cores not only to be able to perform tasks more quickly, but it can perform more than one task quickly at the same time. The cores were distributed to work in the following way:

◉ Four cores for the tough jobs that require a lot of processing power.

◉ Four more are for lighter tasks that do not require much energy, as the right tasks are shifted to them during operation.

◉ Up to 8 cores have been allocated for graphics processing, similar to the way Intel integrated Iris graphics work in Mac mini, MacBook Pro and MacBook Air, the graphic part in the M1 processor can operate an external display at a frequency of 60 Hz and a resolution of up to 6K, such as the Apple Pro Display XDR. 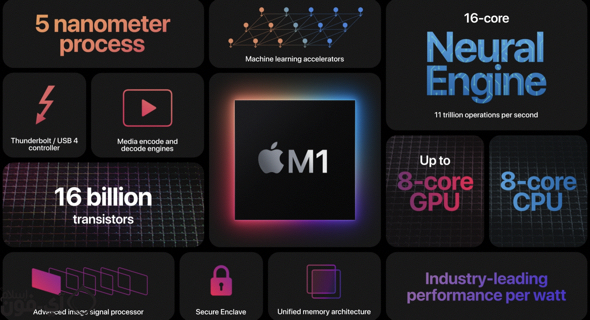 In addition, the M1 chip contains a storage controller for transferring data to and from an SSD for Mac. In addition to it, it contains many other processors, controllers, and sensors that deal with encryption, image processing from web cameras, and other secondary tasks required to operate a computer.

The M1 chip comes with 5nm manufacturing technology “the distance between the transistors in the processor, which increases the number of these transistors and thus greater efficiency”, similar to the A14 processor in the iPhone 12. Meanwhile, Intel's latest 10th generation processors use 7 manufacturing technology. Nanometers, Intel is not expected to introduce processors with 2022 nanometers or less until XNUMX at the earliest.

Intel said in a statement on Tuesday that its CPUs provide customers with the best experience, in addition to being the most open platform for developers, today and in the future.

But it is no secret to anyone that the great disparity in processing technologies between these chips speaks for itself, and other large companies have adopted this technology in the processors industry, as AMD is currently working on a 7-nanometer processor, and it certainly will not stop there.

Artificial intelligence and the M1 chip 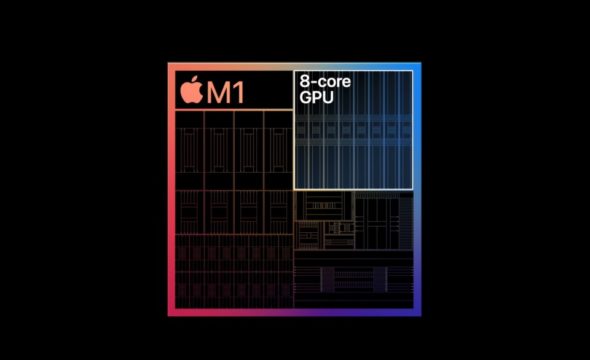 AI algorithms and ML machine learning are essential to help modern software run smoothly. Apple A-series and Intel Core processors have long had built-in AI capabilities, and the M1 processor is no different.

The M1 processor has a dedicated Neural Engine with its own 16 processing cores to handle AI tasks. Have you ever touched an image that uses automatic filters "such as touching the image and dragging left and right to improve its quality", as well as photographing in low light and then improving the image without your interference, these tasks and others often depend on machine learning to work faster.

The M1 processor's neural engine relies on instructions from the operating system to function properly. Many third-party software developers are also integrating AI and machine learning algorithms into their applications.

Are all M1 processors created equal for all devices?

Regardless of whether a computer uses a SoC system, meaning all in a chip or a group of separate components, it still obeys some of the physical properties of those components. Meaning, the more cores the processor dedicates to a particular task, the faster each of these cores will run, and thus the faster the task is completed, and this process in turn generates a lot of heat, and this is the reason that most computers contain fans and heat sinks.

And while Apple hasn't released many details yet, we know that there will be slightly different versions of the M1 for each of the different Macs that it runs on. This is mainly due to the fact that each device handles heat differently. The new MacBook Air does not have a cooling fan, and we know that the M1 chip in the basic configuration of the Air will feature a slightly less powerful graphics processor and there will be two options, the first 7 cores and the second 8 cores.

Meanwhile, both the larger MacBook Pro and Mac mini will come with cooling fans, allowing the M1 chipset to have full-power GPUs. The M1 chip Mac mini and MacBook Pro may have faster speeds than the MacBook Air chip, but Apple has not shared this information.

How fast is the M1 processor? 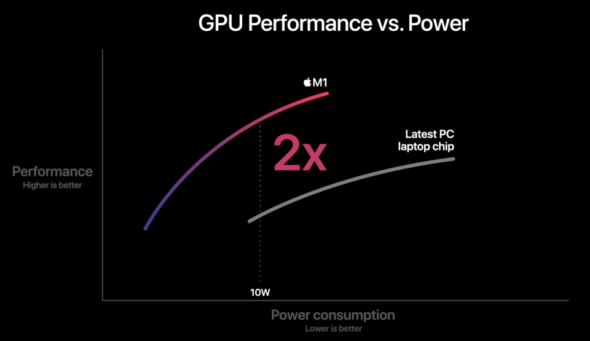 Apple also claims that the M1 Macs are faster than their Windows counterparts. The company estimates that the new M1 in the MacBook Air beats 98 percent of the laptops sold last year. These claims are based on in-house performance tests conducted by Apple, although they do not provide further details on them except to state that they are "industry-standard" standards.

However, the benchmarks can be easily tampered with, so it's too early to determine if the M1 is what Apple says, so it will be tested using reviewer benchmarks when it comes out.

Apple also claims that the M1 processor will provide excellent battery life in the MacBook Air and MacBook Pro. In practical terms, previous models of Air and Pro with Intel chipset provide good battery life as well, usually between 10 and 20 hours of light tasks such as watching videos.

Will my apps run on my M1 Mac? 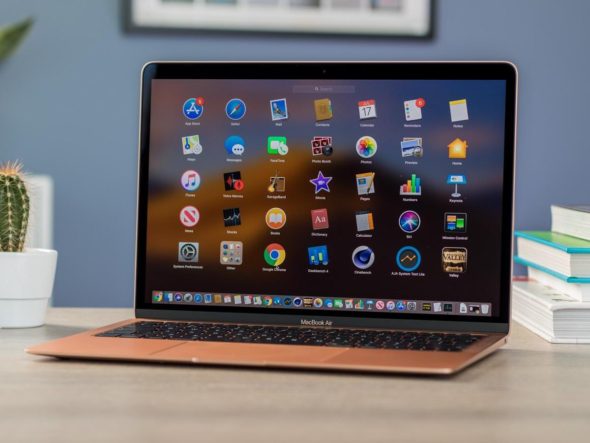 Many macOS applications are designed to run on Intel processors, not the M1. Developers took a head start, as Apple offered them a development kit this summer to help them translate and encode code to support the M1 processor. The truth is that since macOS itself will run on the M1, many third-party apps will not work, at least at first.

However, the lack of M1 support does not mean that third-party applications will not work at all. Apple says the software will work on new Macs through the company's Rosetta 2 software, which works as an emulator. But don't be surprised if this process continues for some time. “It takes time to translate and convert the code to support the M2 processor, so users may notice that applications may run into sluggishness or some problems at times,” Apple wrote in the Rosetta 1 developer documentation.

What if I wanted an Intel Mac instead?

Apple silicon appears to be the future of the Mac, but Intel-powered Macs won't go away overnight. The new MacBook Air and Mac mini exclusively use the M1, but Apple continues to offer the 13-inch MacBook Pro with Intel Core i5 or Core i7 CPUs as options for users. Other Macs, including the iMac, Mac Pro, iMac Pro, and 16-inch MacBook Pro have yet to be updated, and are still powered by Intel CPUs and in some cases optional AMD GPUs are used.

Apple's M1 processors can mark the beginning of a new era of advanced technology, which in turn has evolved from the use of artificial intelligence, machine learning and high processing speed that will actually change a lot of concepts.

What do you think of the M1 processor and did you see it as a leap in the industry? Let us know in the comments