When we watched the Apple conference, and found the announcement of the Apple Watch, the seventh generation, and its features, one of the most important features was a keyboard on the Apple Watch, a feature we all wished for, but this feature only supports the new seventh generation, so we said that there is nothing wrong with an application and it is the only one Which provides a keyboard for previous versions of the Apple Watch, and in order for us to see Apple’s monopolistic style, Apple did not negotiate with the developer, or try to buy his product, but rather simply told him that the application would be deleted, in order to deprive users of this feature, which is one of the most important features The watch is new version, so sales are not affected. 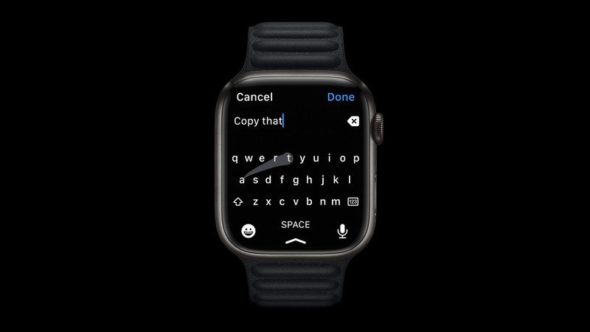 This application is what Apple has removed, and it is an important application for everyone who uses the Apple Watch heavily, and provides Apple Watches with an easy-to-use keyboard.

We cannot say that Apple copied this feature, as having a keyboard in the watch is logical, especially with the seventh generation and the larger screen than previous versions, and certainly the Apple keyboard will be better developed and supportive for most languages, but the problem is to delete the developer application without any negotiation with it To make the user view the new version of the watch and keyboard feature as something that can only be achieved by purchasing this generation.

Apple sent the developer a message telling them that their app is not under the App Store standards and that they will remove the app immediately. 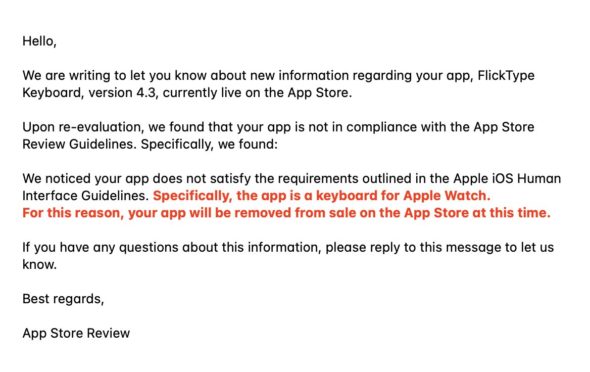 Of course, it was a shock to the developer, who quickly prepared himself to sue Apple, but of course and since now we know that this is a lost case, Apple has an army of lawyers and has the potential to exhaust a single developer trying to take his right and the right of users.

The truth is this is a great shock that Apple gave us (other than the shock of the iPhone, which does not offer anything new), did Apple reach all the billions it has to take the right of a developer and in public, it was very clear when Apple announced the keyboard feature in the watch The new Apple and then immediately delete the keyboard apps for the Apple Watch, that this step is in order to keep this feature exclusive to the new generation of the watch and thus increase sales, no one blames Apple for adding this wonderful feature, and as we mentioned certainly it was developed better, but it was from You can negotiate with the developers, or keep these applications running only on watches in previous versions, but Apple took the position of oppression and greed, so although we praise Apple a lot, this method of dealing with developers will make Apple lose its most important characteristic, loving community From developers and users.