Other than the main features announced in an update iOS 16There are a number of changes, improvements, and new capabilities that have been incorporated into the ‌iOS 16‌ update that help improve your iPhone experience. In this article, we list 16 hidden features in the iOS 16 update that you may not have known about. 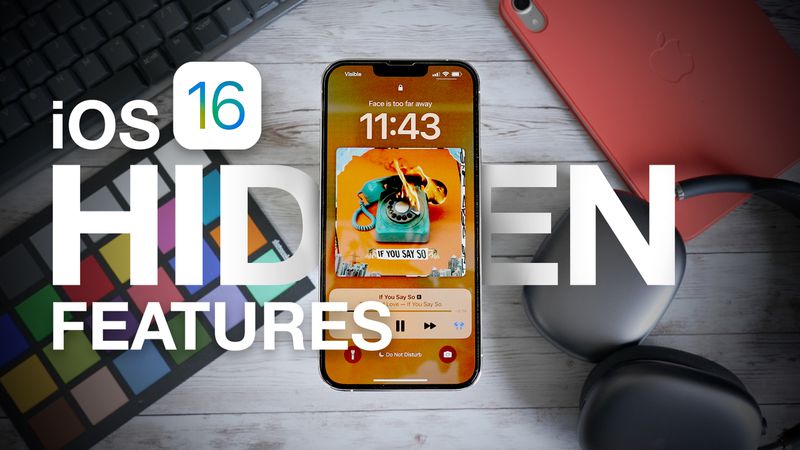 Get rid of duplicate photos 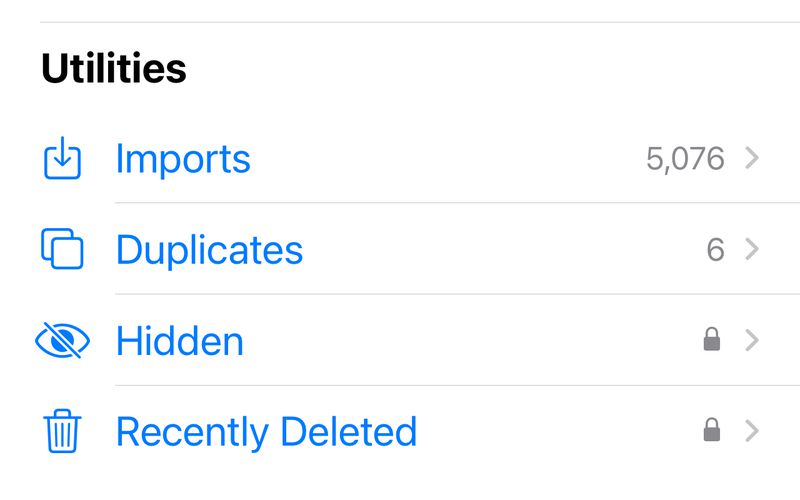 The Photos app in the ‌iOS 16‌ update can tell you if you have multiple identical photos, giving you the opportunity to delete them to save space. Duplicate photos are included in a new album titled “Duplicate” It only appears in case you already have duplicates.

Apple calls the new feature “Duplicate Detection.” Using machine learning on the iPhone on the ‌iOS 16‌ update, it will detect all the duplicate photos and group them in your library under the “Utilities” section of Photos.

Thus, you will be able to easily delete them, freeing up space on your device, and since the feature requires the iPhone to scan and sort all the entire photos, it may take some time before the iPhone starts offering duplicates for deletion. 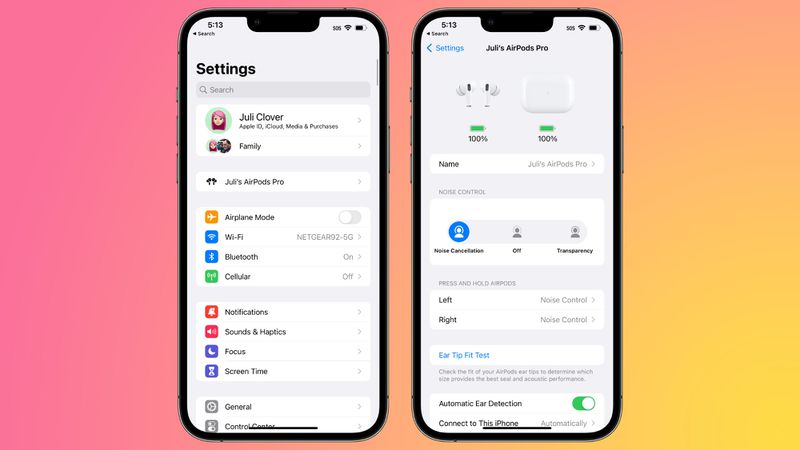 In the iOS 15 update, accessing AirPods settings requires opening the Bluetooth settings and tapping the “i” next to the AirPods menu, which is a hidden and hard-to-find menu for those unfamiliar with the iPhone.

It's even easier to manage AirPods settings with a dedicated Settings section when it appears when they're connected. The ‌iOS 16‌ update also adds a custom spatial audio feature that uses the TrueDepth camera to scan your ears, providing a unique listening experience.

You can still access the same settings in the Bluetooth menu and see About AirPods under General, then About.

On supported models, there are direct options to set up custom spatial audio and display AirPods in Find My. 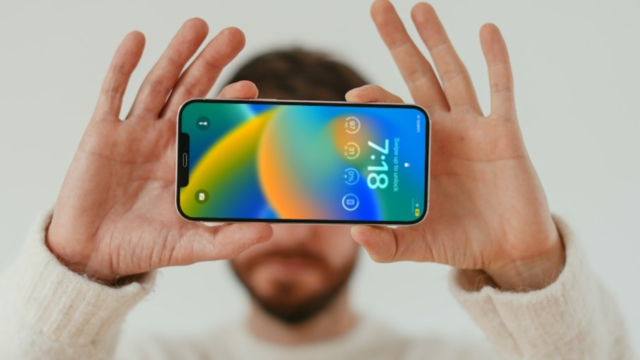 iPhone models running iOS 16 support face recognition in landscape mode, making it easy to unlock the iPhone when it's not in the standard portrait orientation. The feature is limited to iPhone 13 and later. 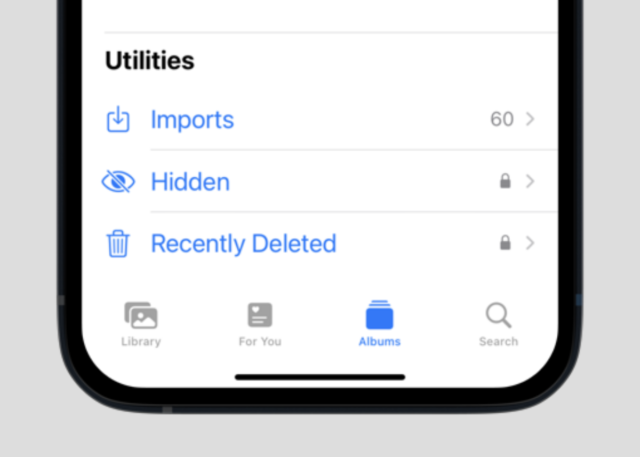 In the iOS 16 update, you need to authenticate with your face or fingerprint before you can access hidden and recently deleted photo albums. This basically locks these albums from view if someone gains access to your phone while unlocking it some other way. 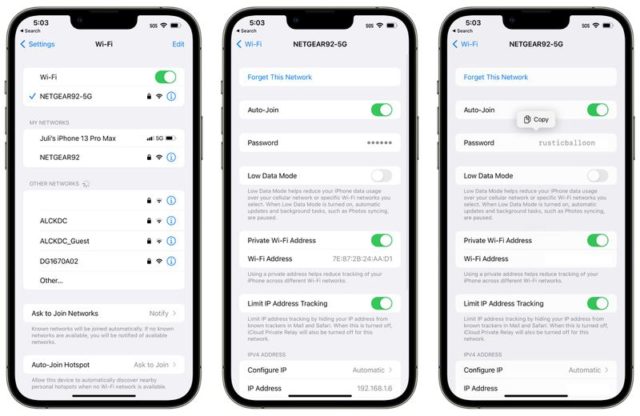 It used to be annoying because you can't access the Wi-Fi password of the network you're using and it gets worse if you've forgotten your network password, this has changed in the ‌iOS 16‌ update, where you can see the Wi-Fi password through Settings, then Wi-Fi, then click on the network you are connected to, and here you can see a new “password” option, clicking on it will show the password of the Wi-Fi network that you are connected to, after authenticating with your face, fingerprint or passcode to unlock the I-lock -fone.

No doubt, this is a useful feature if you need to share a password with someone else or if you want to connect on an Android device where sharing is not available automatically. 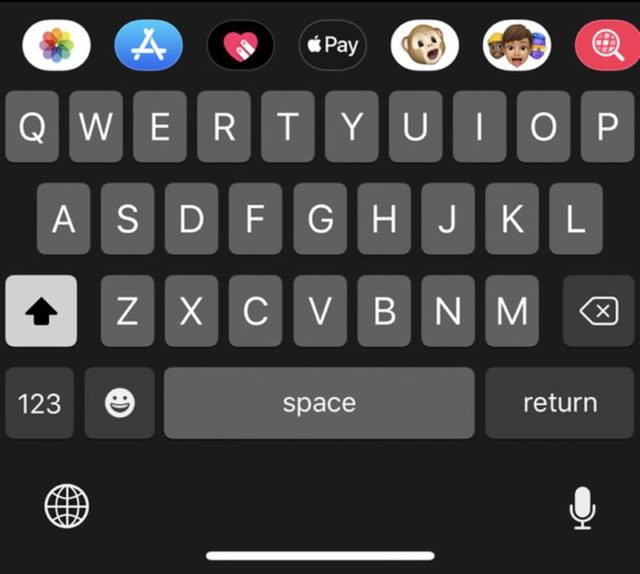 There is a keyboard setting in the ‌iOS 16‌ update that lets you enable haptic feedback that can be felt as you type. Dedicated vibrations for each keystroke, providing users with physical confirmation that a character has been clicked. 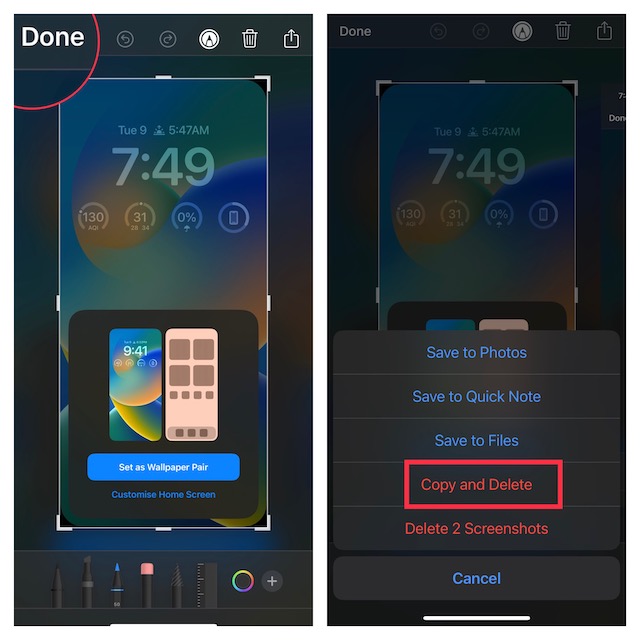 When you take a screenshot on iOS, along with the ability to save the screenshot in Photos, save it as a quick note, and save it to Files, you'll now be able to "copy and delete" the captured image. The new option saves the screenshot to the clipboard and then deletes it from the camera, making it easier to use screenshots once without saving them on the iPhone, and you won't need to delete them later.

Ability to delete Find My, Clock and Health apps 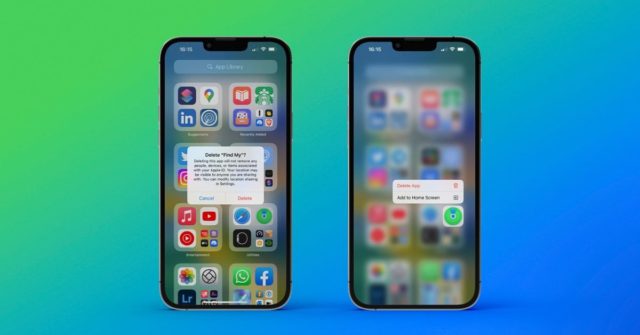 With the iOS 14 update, Apple allowed users to offload some pre-installed apps on the iPhone. And in the iOS 16‌ update, Apple is expanding the number of apps you can delete, which now includes Find My, Clock, and Health, and can be re-downloaded from the App Store later if needed. 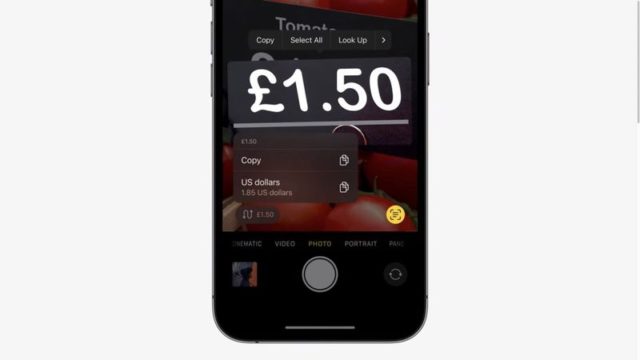 With new features in Live Text or Live Text, iOS now includes a currency converter feature built into the Camera and Photo apps. Just install the iPhone camera up to the specified price, wait for the live text icon to appear, tap and hold the price, and select “convert.” Live text also supports translation and scale conversion. 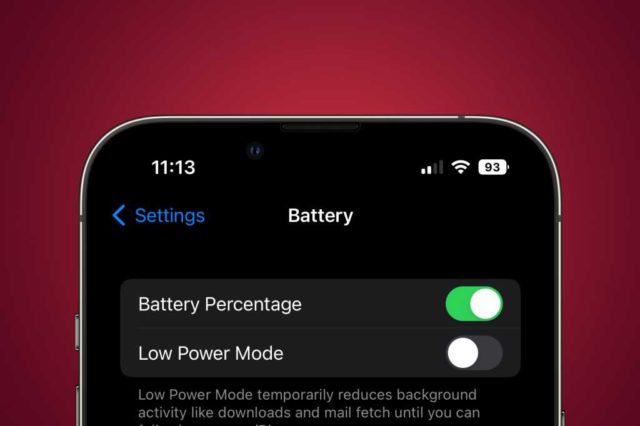 In iOS 16‌, Apple gives users the ability to view their battery percentage directly in the status bar inside the battery icon, eliminating the need to swipe to the Control Center to check the battery level.

Use Siri to end a call 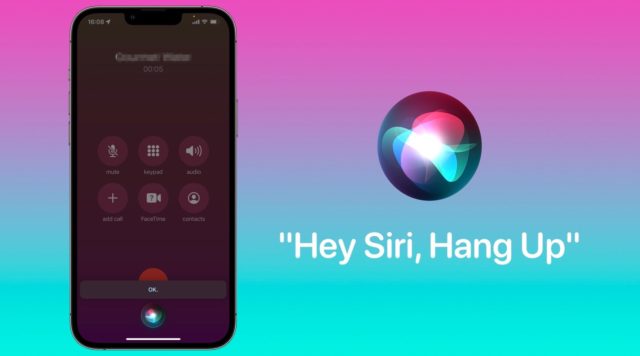 New settings in ‌iOS 16‌ allow users to use Siri to end an active call. By heading to Settings, then Accessibility, then Siri and activating Call Hangup, users can now say “Hey Siri, hang up” to end an active call. Note, however, that the other person you're speaking to will listen to your request that Siri hang up before you hang up.

Users on the iOS 16‌ update will now be able to disable the side button so that an active call will not end. In previous versions of iOS, pressing the side button and locking the iPhone while on a call ended it immediately. In ‌iOS 16‌, Apple allows users to disable this to prevent any error that may occur during calls, by going to Settings, then Accessibility, then Touch, and then activating the "Prevent lock to end call" option. 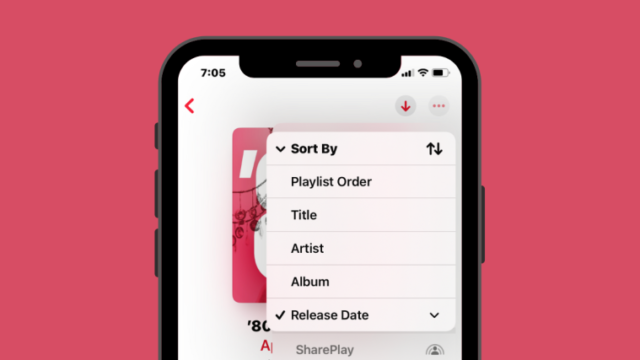 In the Apple Music app on the iOS 16‌ update, users will now be able to sort playlists by title, artist, album, and release date. The new sorting option can be found by pressing the three dots in the upper right corner when viewing the playlist. 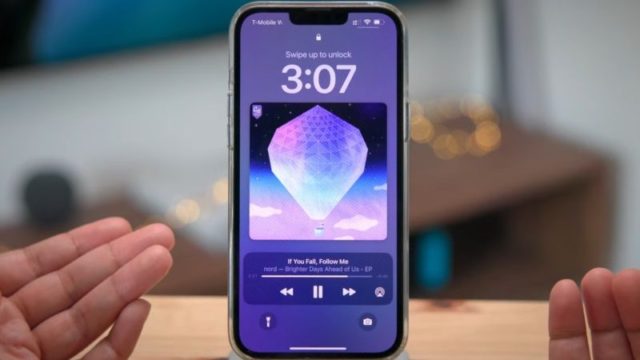 One of the main but perhaps less well-known features of the ‌iOS 16‌ update is that Apple is bringing the music player back with a full screen lock screen. When listening to audios from the Apple Music app, Spotify, or other third-party music apps, tap the album art on the lock screen from Now Playing to enter the all-new player theme. And tap the full screen album art to reduce Now Playing. 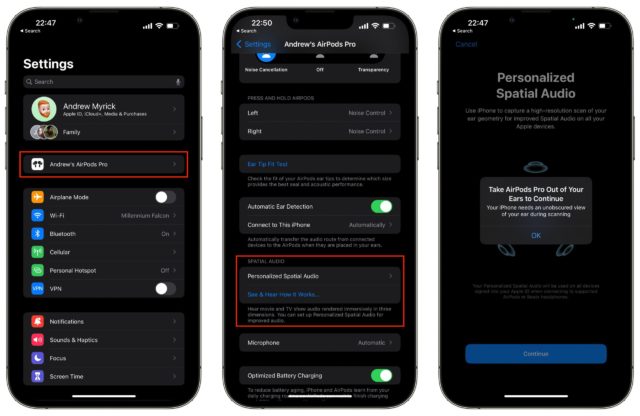 With the latest AirPods and some Beats headphones, iOS 16‌ users can activate custom spatial audio. Custom Spatial Audio uses the LiDAR scanner on the iPhone 12 Pro, iPhone 13 Pro, or iPhone 14 Pro to scan the user's ears in order to provide a better spatial audio experience. 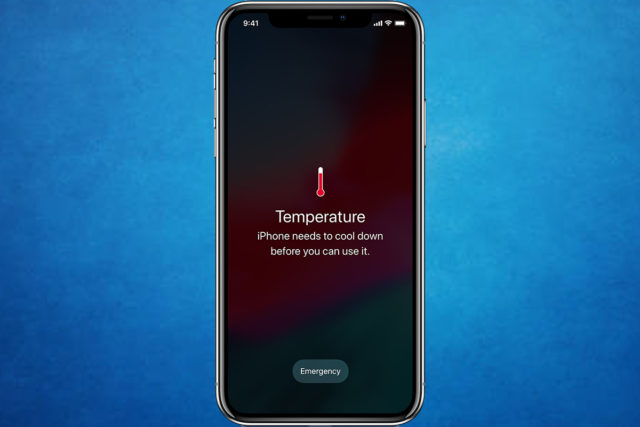 In the ‌iOS 16‌ update, if your iPhone is hot, you'll get a new notification telling you that charging will be paused until the iPhone's temperature drops. This is done to prevent long-term damage to the battery.

Of course, that's not all. The coming days may bring up new things buried in the iOS 16 update that we didn't know about.

Have you updated your iPhone to iOS 16? What are the features that you liked best? Let us know in the comments.