The iPhone 14 Pro and iPhone 14 Pro Max models will start reaching customers and will be launched in stores tomorrow, Friday, September 16, and before the launch date, many of their first reviews have been shared. 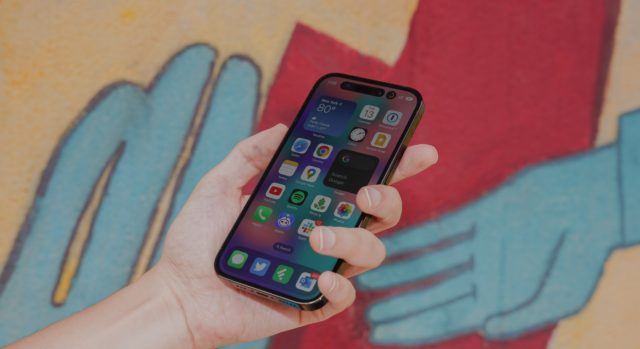 Key new features for iPhone 14 Pro models include an always-on display with a new interactive island, upgraded cameras with a 48MP main lens, vehicle accident detection, emergency satellite connectivity, the A16 Bionic chip for faster performance, and other features. It comes in deep purple and space black, and the emergency satellite service won't be launched until November, so it didn't have any reviews.

The only differences between iPhone 14 Pro and iPhone 14 Pro Max Regarding screens 6.1 inches versus 6.7 inches, battery life, and weight. We've compiled both written and video reviews of the iPhone 14 Pro models below, complete with a feature-by-feature breakdown.

Specialists at The Verge made a review of the iPhone 14 Pro and Pro Max, from which we take how the interactive island works.

◉With the help of the system, it transforms into different shapes and sizes for things like incoming phone calls, alerts, notifications, face print authentication, recordings, live activities, and more. 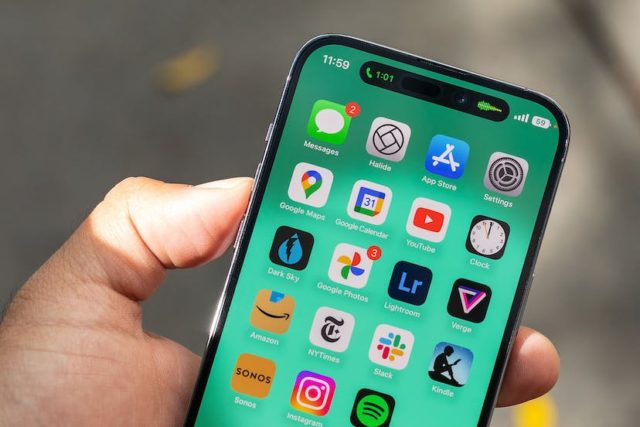 ◉ The feature's potential is not yet fully realized, as it currently only supports third-party apps that use Now Playing or CallKit APIs.

◉ Between the two holes several status indicators have been added such as plugging in the charger or flipping the mute switch. Having a call in the background puts a green dot in the corner; The application that uses the site we find a blue dot. Screen recording and Personal Hotspot also contain pointers, and more. 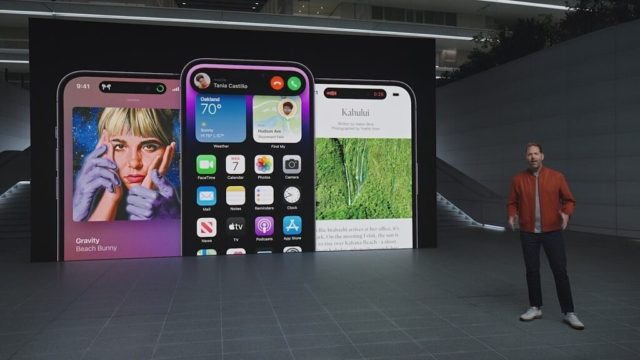 ◉ The simplest way to understand the island is that it is basically a new widget system, and widgets can have three views: the main view on the island, an expanded view, and a very small icon when two things are displayed simultaneously, here we find that the system has a menu Internal priorities to put the two most important things on the island.

◉ The interactive island is like a secondary display that can be enlarged or reduced, and in the normal lighting of the room, it will seem to you that the hole on the screen is getting bigger and smaller, and the animation in it is really fun. But in sunlight or brighter light, you can see the camera sensors, and the illusion is gone, but it's still pretty cool. 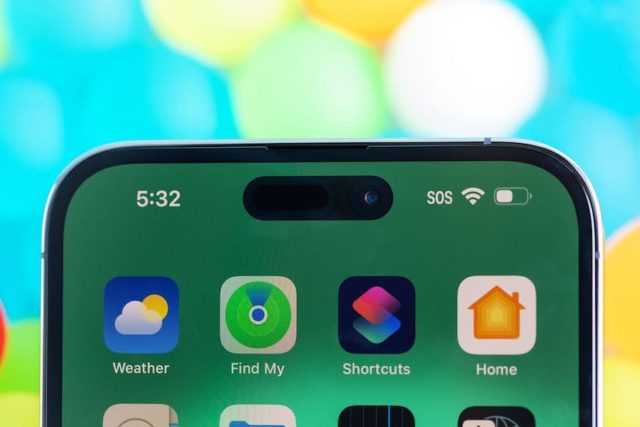 ◉ Interactive Island is only related to the application you are using. Tapping it quickly will open the relevant app, and tapping and holding will display shortcuts around it.

◉ Many people wonder if fingerprints will interfere with the front camera, of course it will inevitably happen, and you should avoid touching this place too much.

◉ Interactive Island needs some improvement and attention from developers before we really know how important it is, and whether it will really change the way we use our phones. 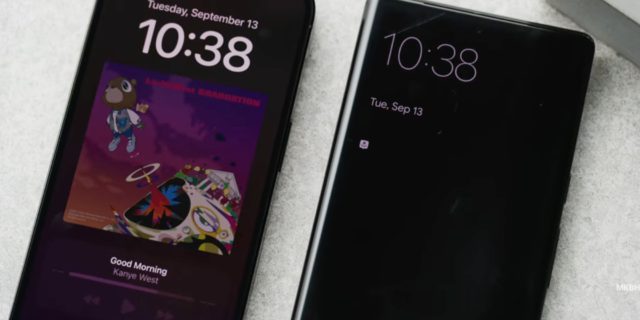 ◉ When the screen is locked, it doesn't go completely black at once, the screen speed is slowed down to 1Hz and almost everything is hidden. The widgets, notifications, clock, date and background are all visible.

◉ Compared to Android devices, we find that most pixels are turned off except for a few for the clock and black and white notifications. And the monitor has proven somewhat controversial with reviewers saying it actually always works. Where Apple displays the time and widget and we find that the background is faded and not completely black.

◉ Apple has taken the Apple Watch approach, which is: what appears on the screen stays on the screen. But what happens is the refresh rate goes down to the lowest frequency which is 1. Some reviewers said that this affects the battery, and some of them said that it does not. It's also smart to turn off the screen when the iPhone is facing down on a table or in a pocket, or while you are in focus mode such as sleep mode.

◉ If the screen does not stay dim with you and this bothers you, it is best to turn this feature off. Go to Settings, disable Always-On, but we don't recommend it, you might want to not miss a thing when you look at your phone screen especially when you peek at your next meeting, the weather, or a whole lot of potentially important notifications. The alternative solution is to leave the feature running but change the background to a darker black one. 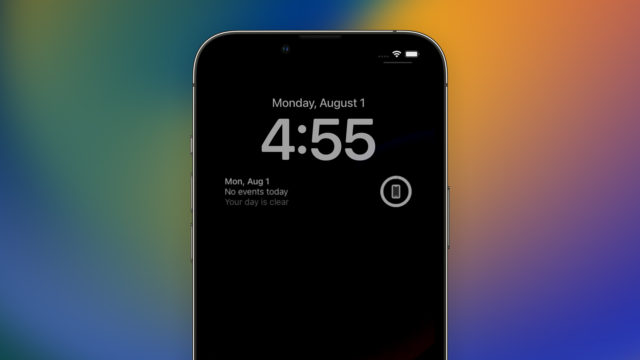 ◉ The reviewer stated that using the always-on screen does not negatively affect the battery life or the overall operating time of the iPhone 14 Pro or 14 Pro Max. He's still able to get a full day of moderate use on the 14 Pro, and with the larger iPhone Pro Max in battery capacity, it lasts a day and a half with the same use. Apple said there are some improvements in the new A16 Bionic processor, which has cores designed to be an efficient screen driver. 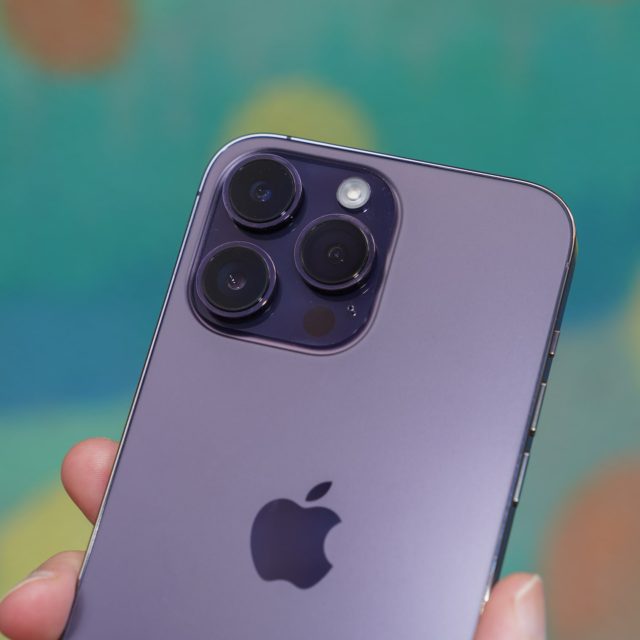 Raymond Wong posted from the site Input The iPhone 14 Pro's new 48MP main lens is on the line and he liked the 48MP ProRAW photos, but said he hardly noticed a difference in the 12MP photos in daylight.

◉ The first thing to know is that the iPhone 14 Pro and 14 Pro Max cameras are identical. Both have a new, larger 48-megapixel main lens sensor. The other two lenses, the ultra-wide angle lens and the telephoto lens, are still 12MP, but have been improved in different ways.

◉ This is the first time that Apple distinguishes between iPhone Pro cameras with a higher resolution main lens. For comparison, the iPhone 14 and 14 Plus are equipped with 12MP sensors for the dual-lens camera system.

◉ Image sensors for both the 48MP main lens and the ultrawide lens are actually much larger than those on the iPhone 13 Pro, with the main lens sensor 65% larger and “almost twice the size” of the ultrawide sensor according to Apple . As a result, these larger sensors let in more light, resulting in brighter images with greater detail when the lighting is poor.

Regardless of the rest of the camera specifications, these are the results:

◉ 12MP shooting for iPhone 14 Pro, picture details are clearer, with less image noise in almost all kinds of light. The image may be similar to the iPhone 13 Pro, so it is difficult to differentiate between them. This is a picture of the iPhone 14 Pro. 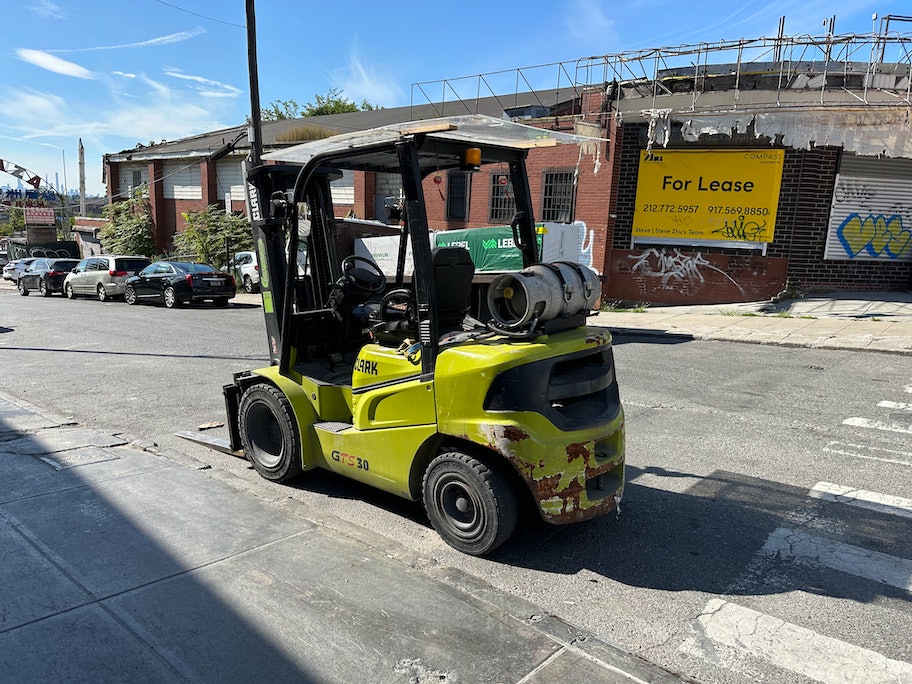 As for the picture of the iPhone 13 Pro: 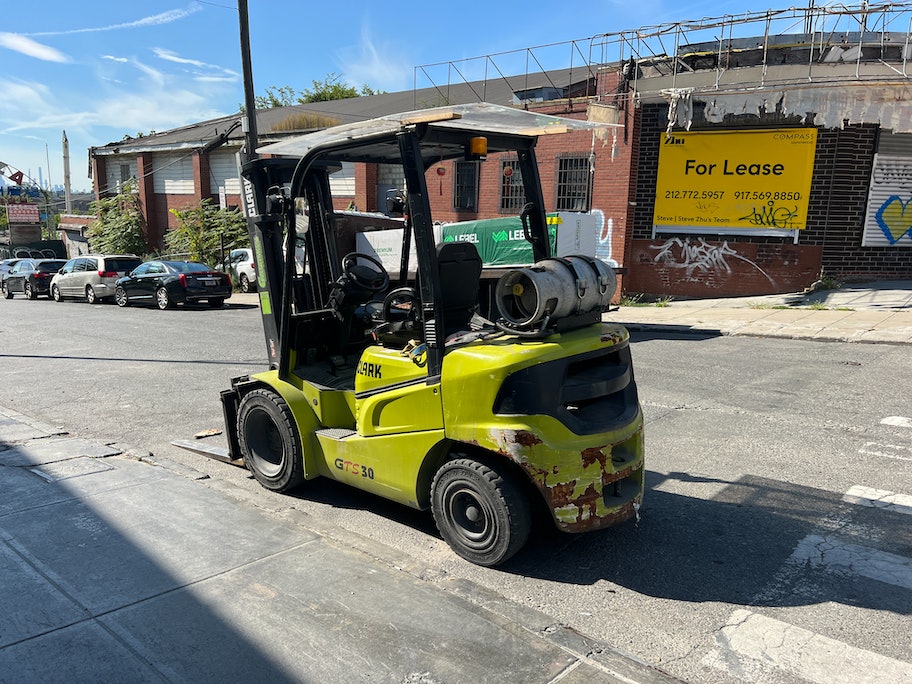 ◉ It is of course different with 48 MP ProRAW shooting; These images are huge, often between 70-80MB in size, and the amount of detail you can get is quite large.

◉ ProRAW imaging technology was a bit disappointing for iPhone 13 Pro and 12 Pro; There is hardly more detail to be gained from a 12MP RAW than in a 12MP JPEG format. It's different with 48MP ProRAW files.

◉ See for yourself. Below are two photos. The left image is a 12-megapixel one. The image on the right is a 48MP ProRAW image converted to a full-resolution JPEG format. 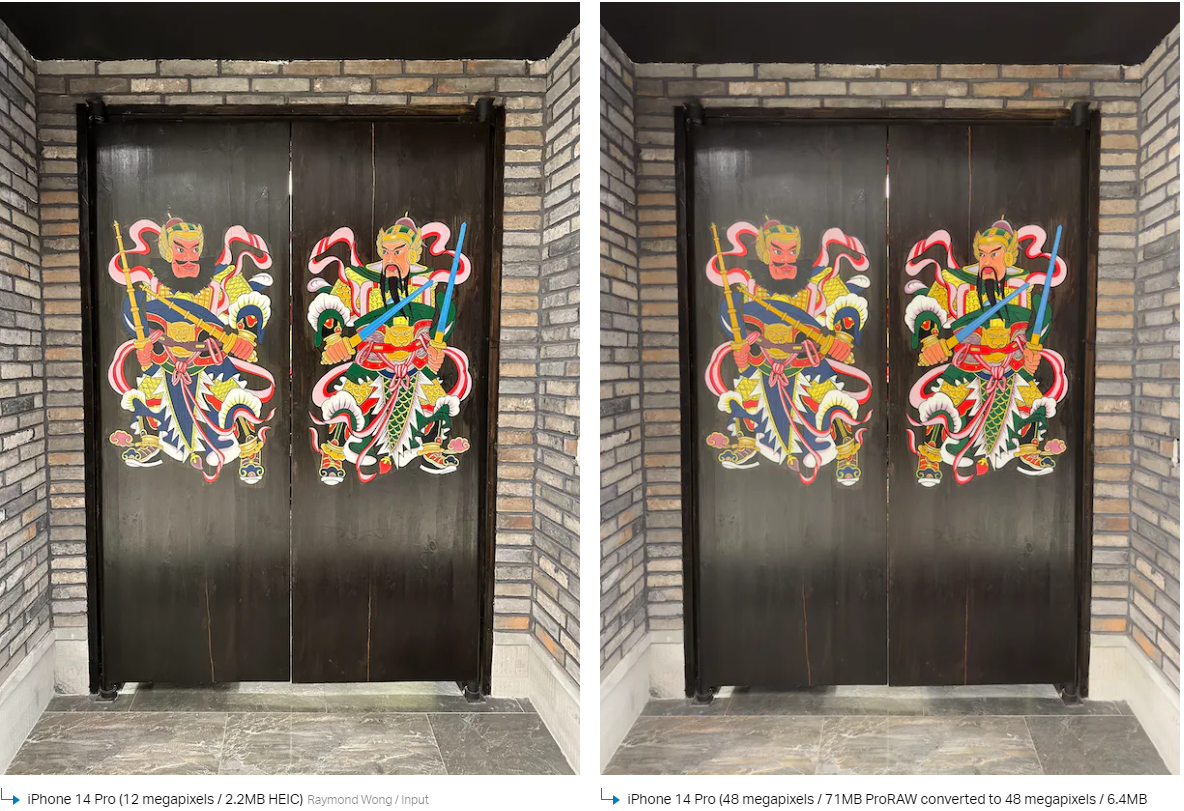 ◉ In the 12MP image, only zoom in or out can be cropped to full size. 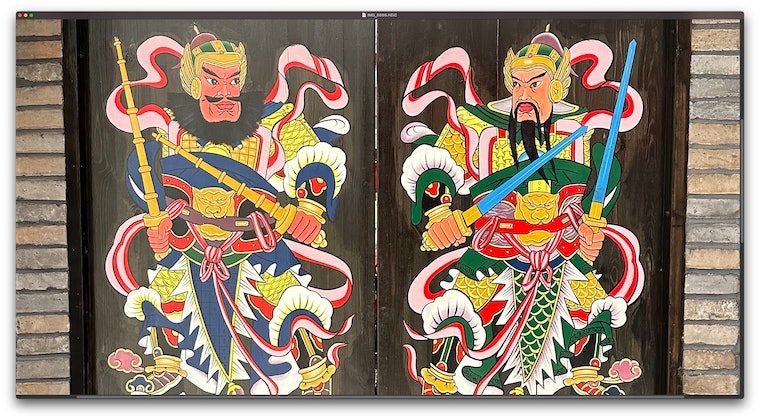 ◉ But look at the 48MP RAW file below, you can zoom in further, the details are still unaffected, it's really impressive for a smartphone camera. Everything Apple does with the optical engine is like magic. 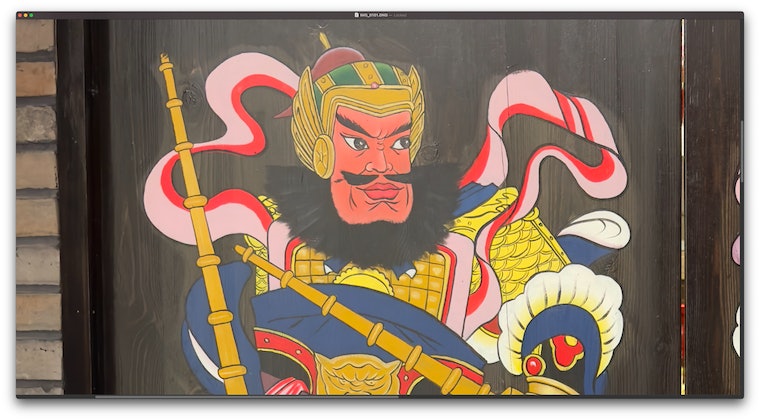 ◉ iPhone 14 Pro's 12MP ultra-wide lens captures images with less noise. You really have to scrutinize the pixels to see the clarity. 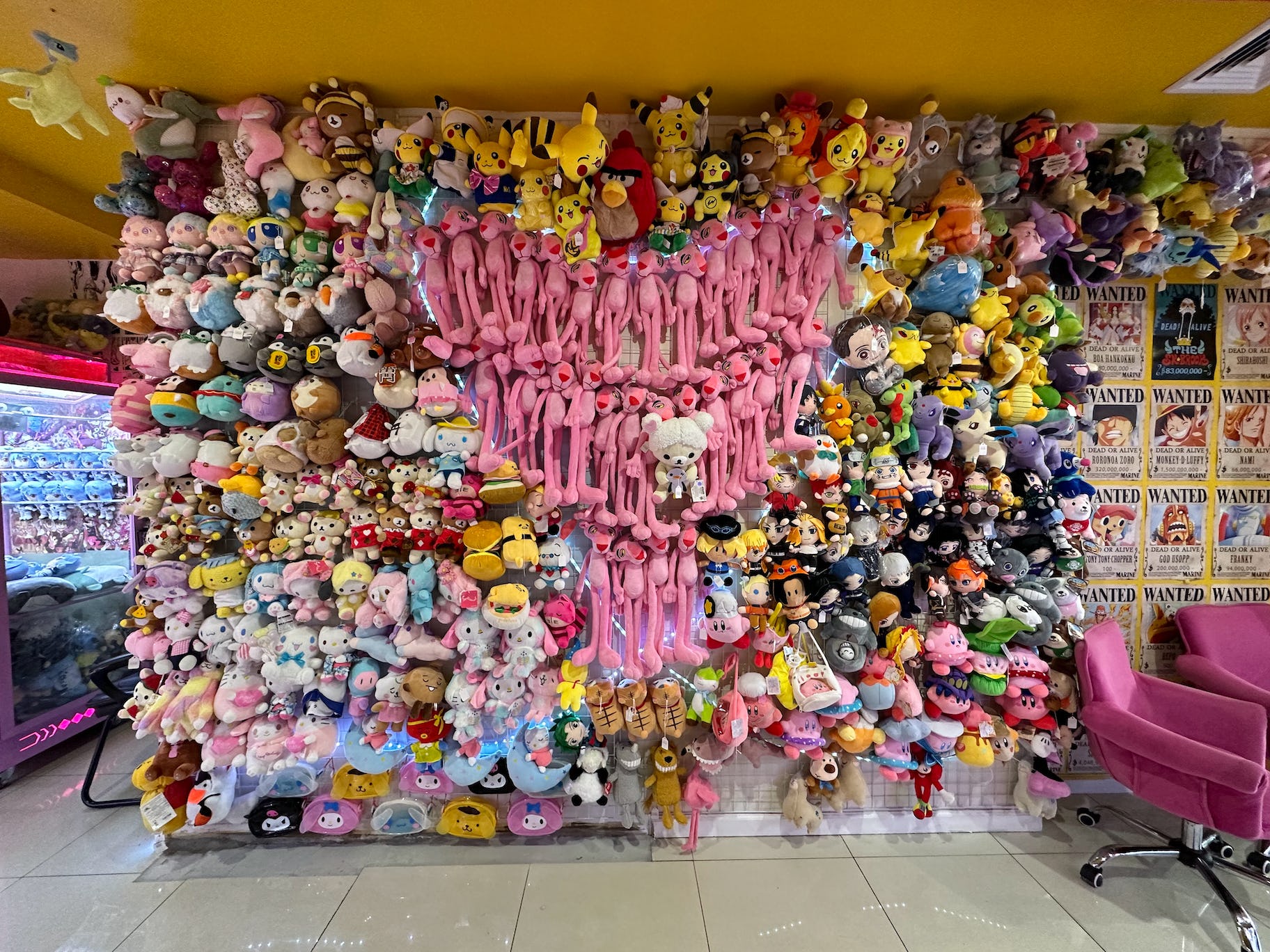 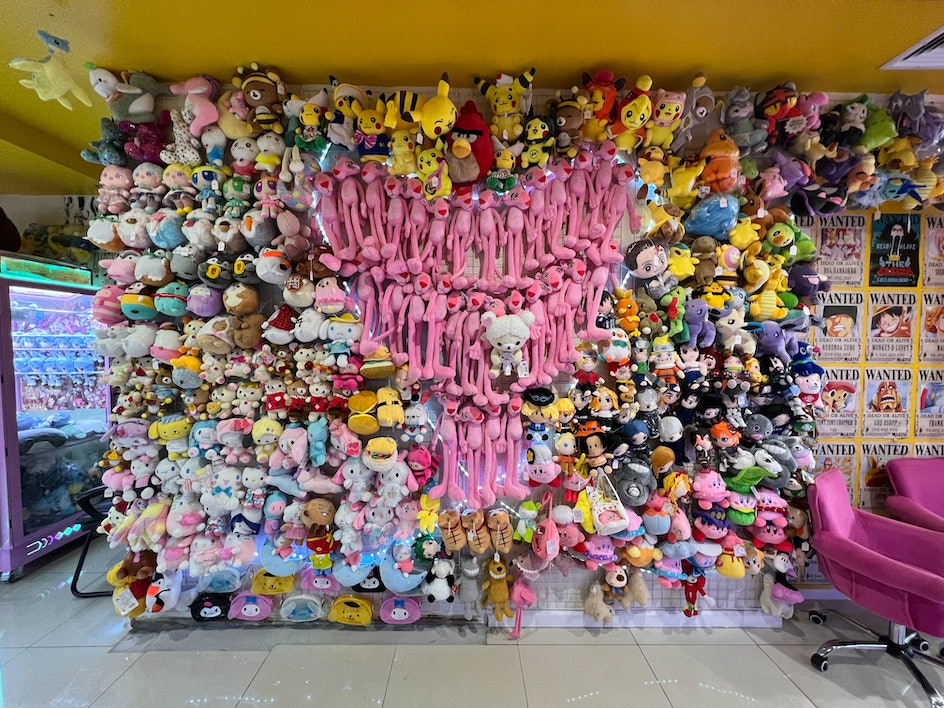 ◉ The iPhone 2 Pro's 14x zoom is also impressive. The 2x telephoto is actually zoomed in at 12MP taken from the 48MP sensor. The photo looks as good as the photos from the 2x optical zoom of the iPhone 12 Pro; In low light, 2x telephotos look better because they get all the benefits of a larger quad-pixel sensor and larger f/1.78 aperture. 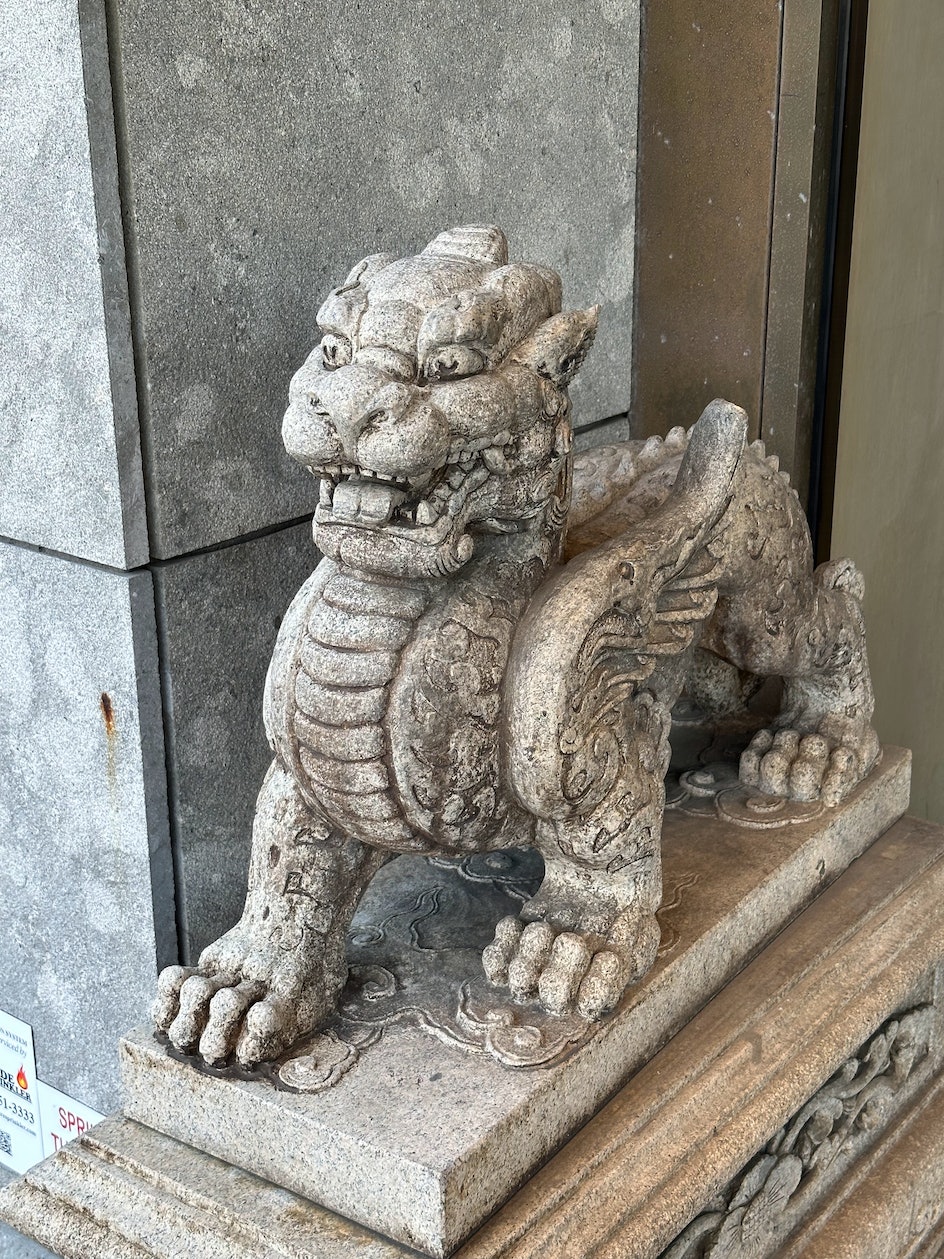 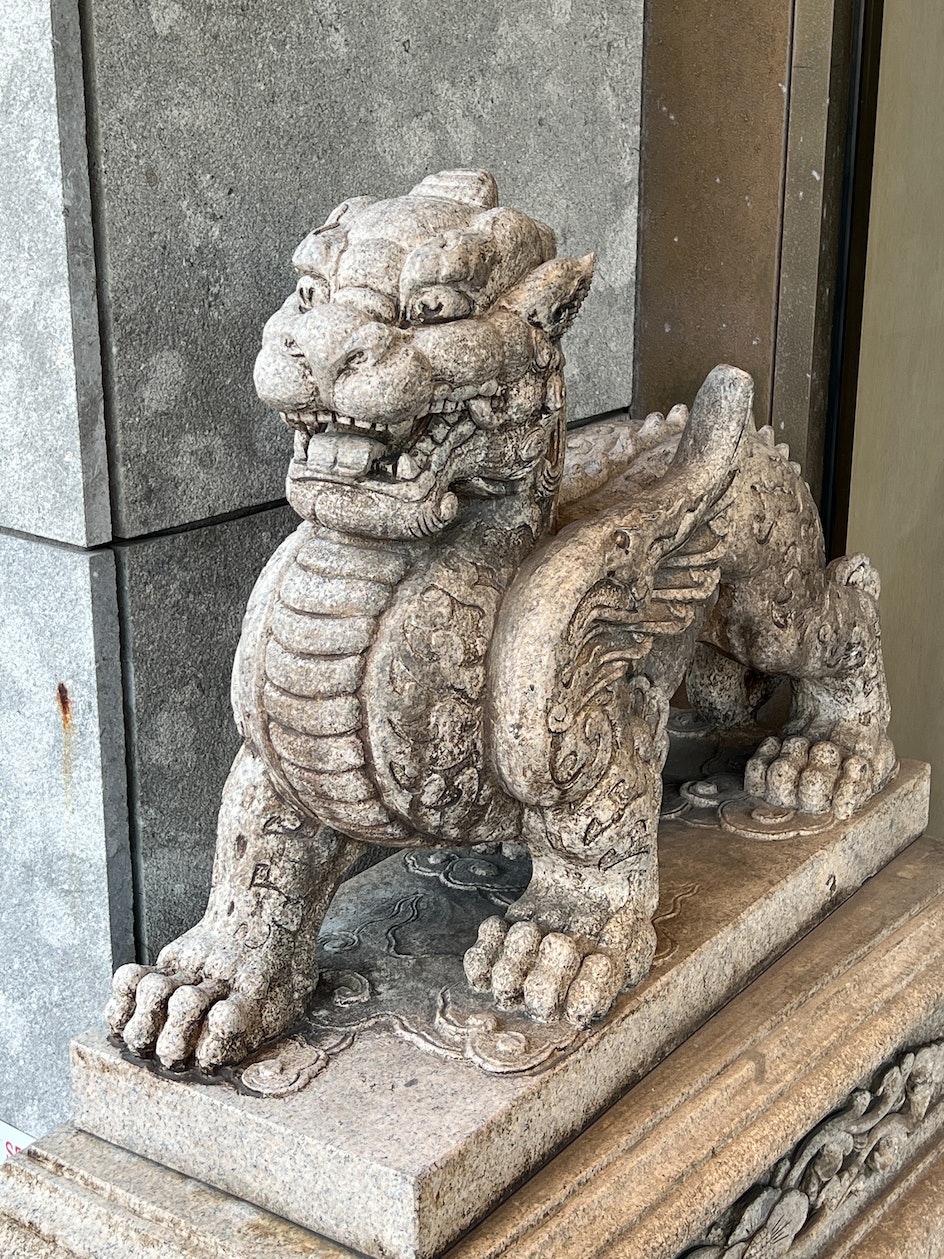 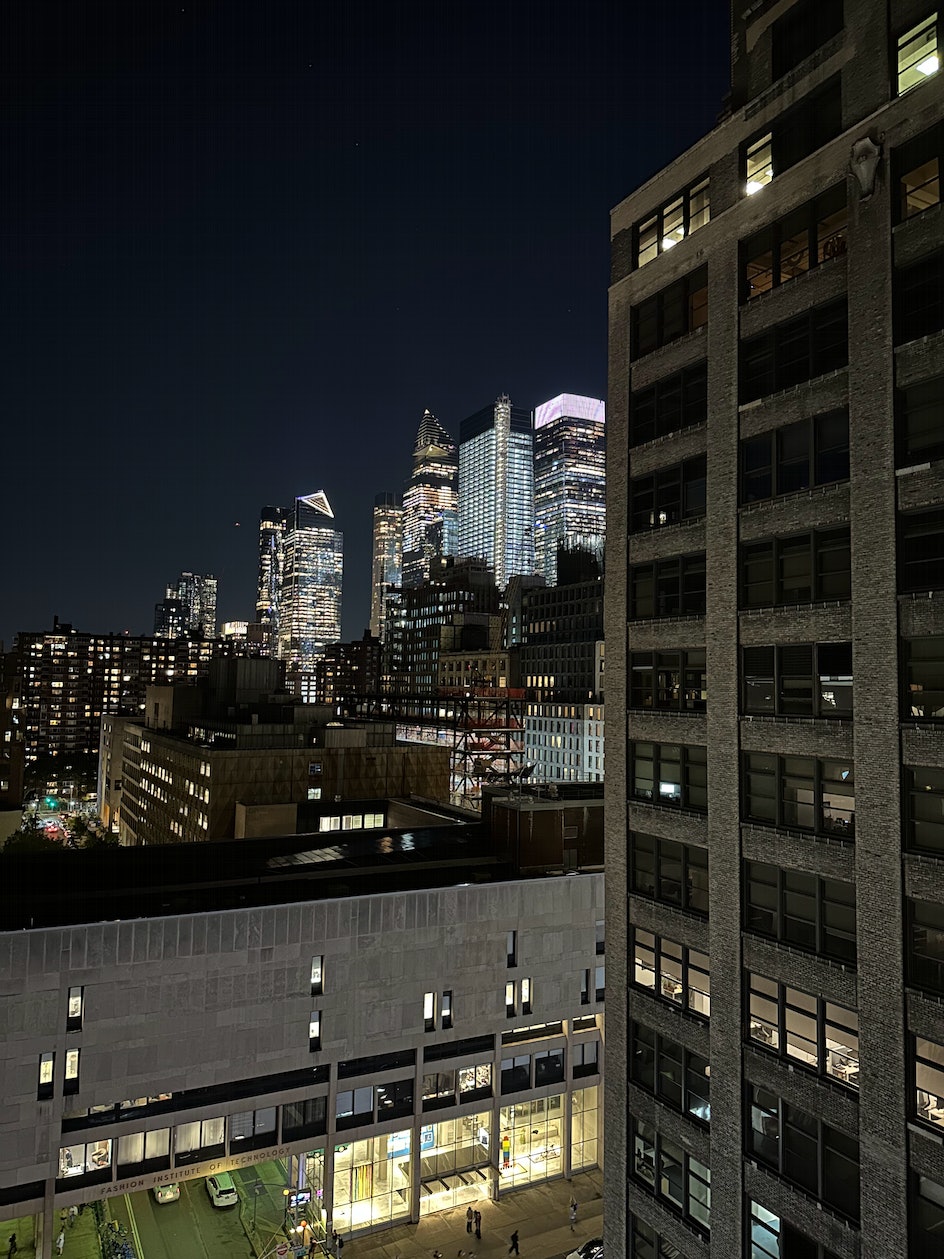 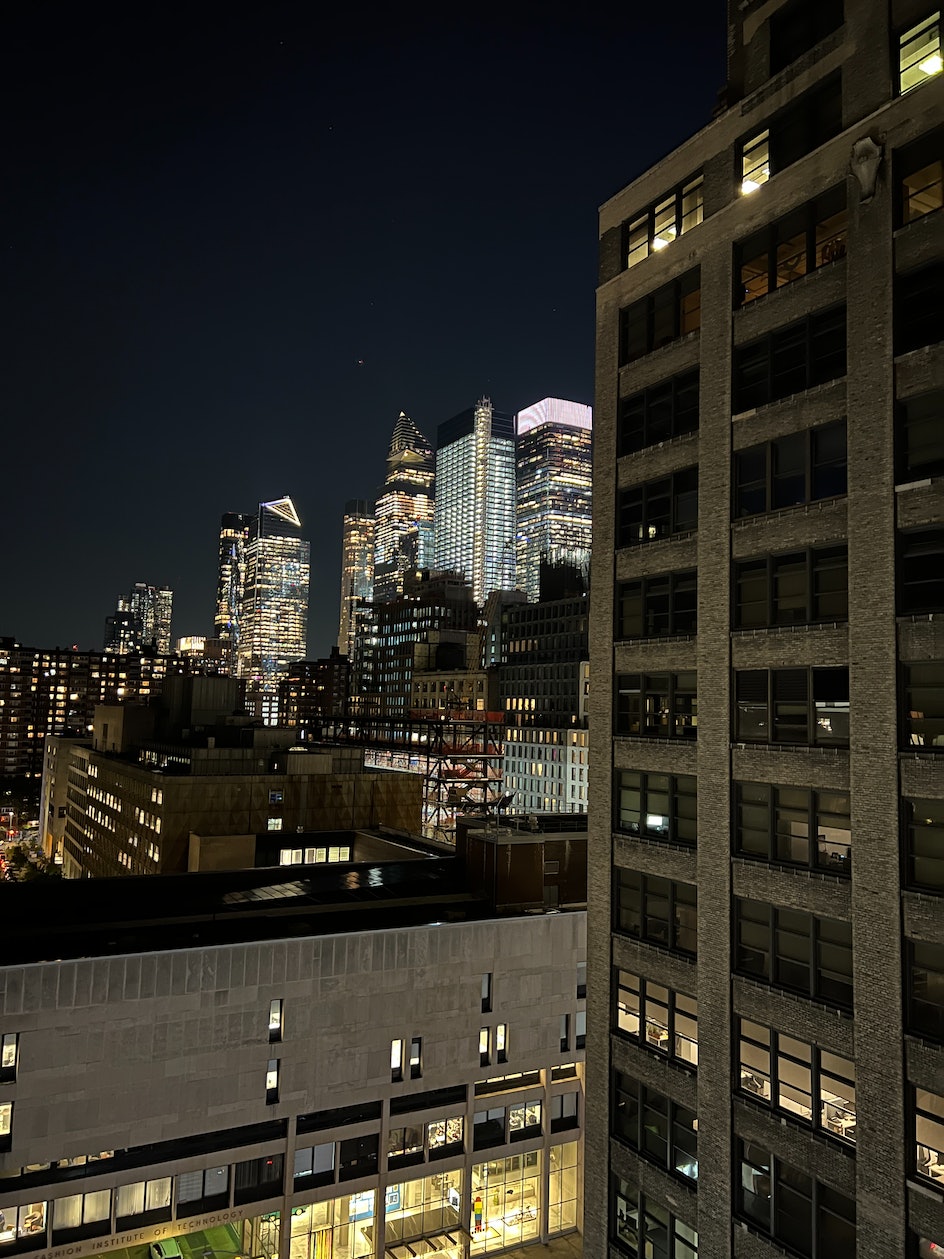 ◉ iPhone 14 Pro is not without some shortcomings in low-light photography. Some close-up comparisons made in low-light have longer lens flares from bright objects and colors can appear flatter, with less vibrancy and contrast compared to the same image taken with the iPhone 13 Pro.

◉ iPhone 14 Pro main camera may sometimes prefer to reveal more shadow detail at the expense of color vibrancy. It's something that can be easily fixed with some tweaks within the Photos app on iPhone.

◉ Portrait mode images look the same. The iPhone 14 Pro's machine learning models do a good job of blurring the background using the 2x digital zoom photo mode. It is very similar to the 2x optical zoom of the iPhone 12 Pro.

◉ The same applies to the 3x optical mode comparison between iPhone 14 Pro and 13 Pro. They look very similar in terms of depth of field. The differences are subtle. The skin tone in the iPhone 14 Pro photo is less red than it was in the 13 Pro shot. And you can also see how the bokeh balls are displayed a little differently in the background. Perhaps the best here is the bokeh effect on iPhone 13 Pro; You can distinguish the red and orange colors of banner lights in the background, while it is more red in the image of the iPhone 14 Pro. 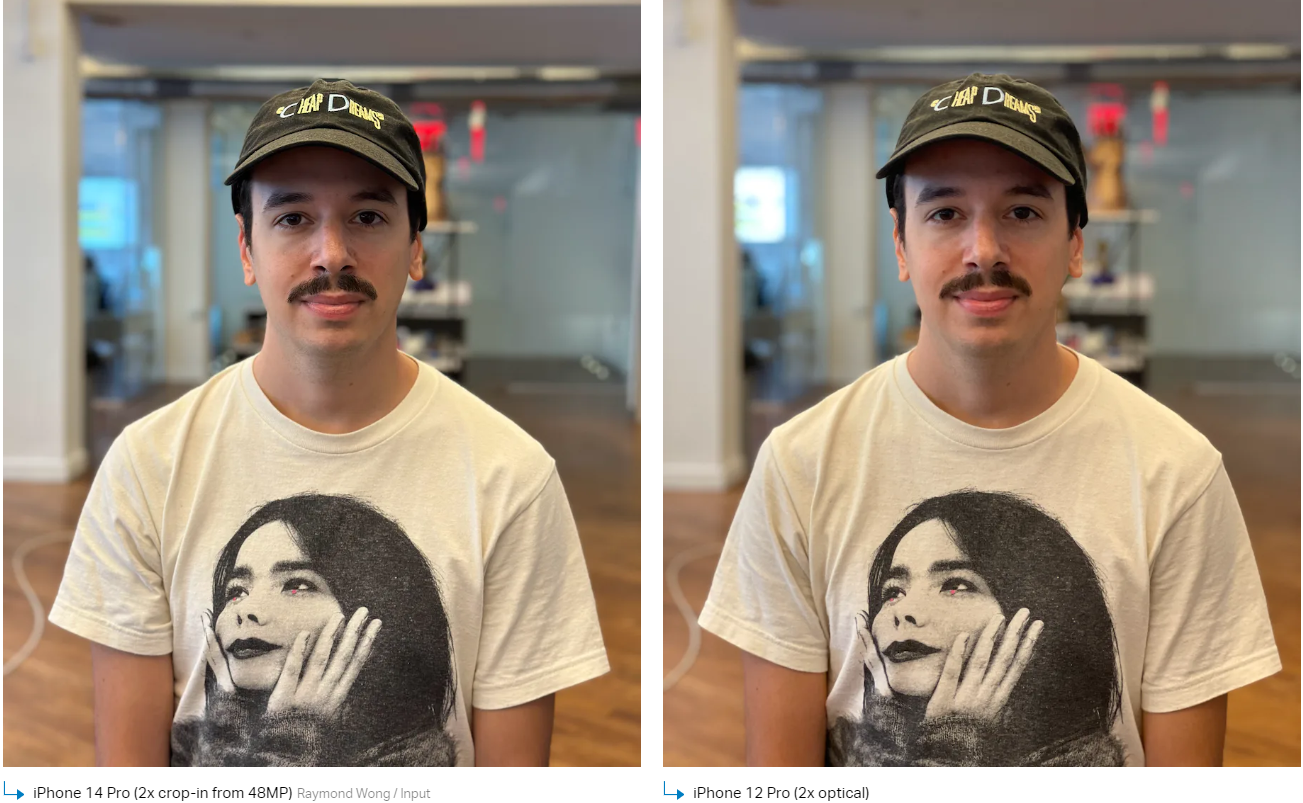 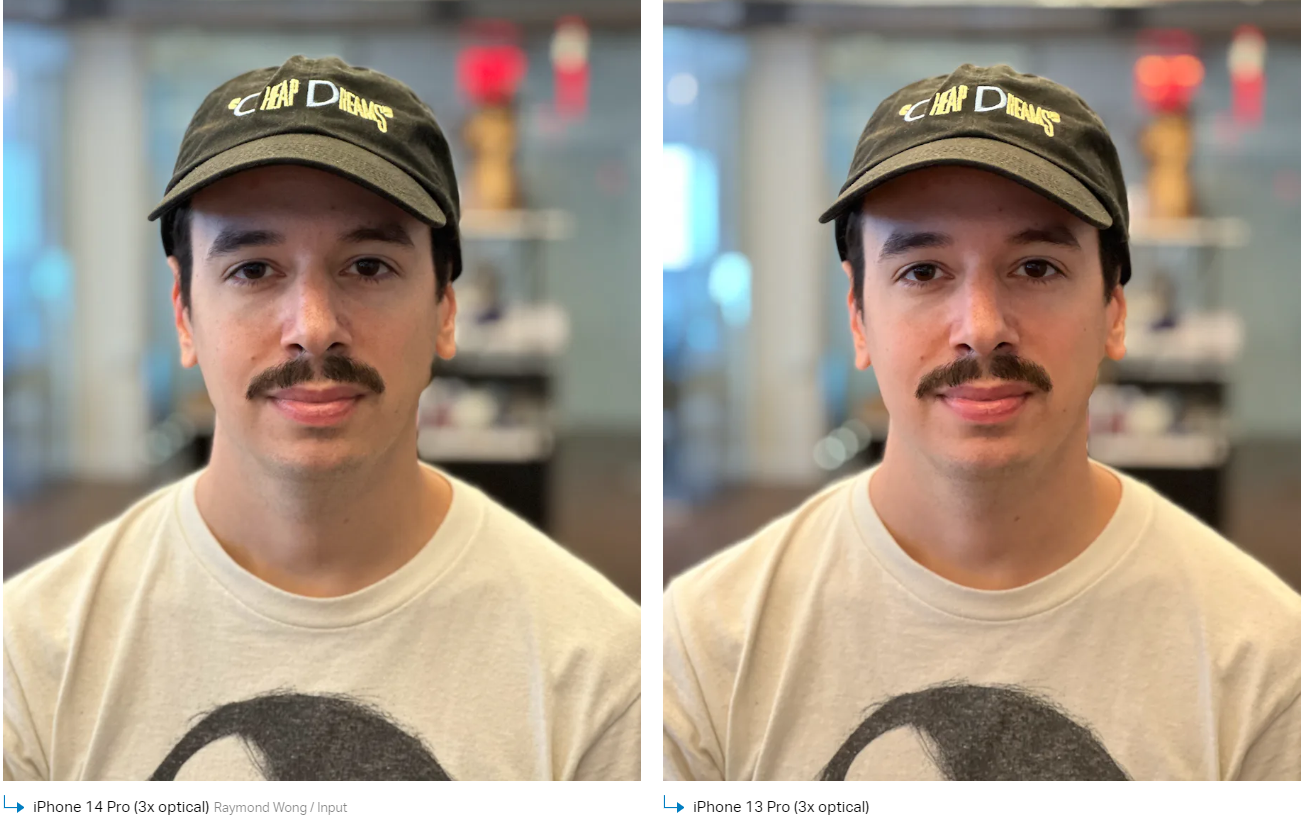 ◉ It's hard to believe that iPhone 14s were the first iPhones with autofocus in selfie cameras. While image quality is somewhat similar in good lighting and marginally better in dark scenes, the autofocus does its job of locking in to your face or multiple faces. I'm not the biggest selfie shooter, so the front camera AF is less important to me, but if you take a lot of selfies, you'll appreciate it. 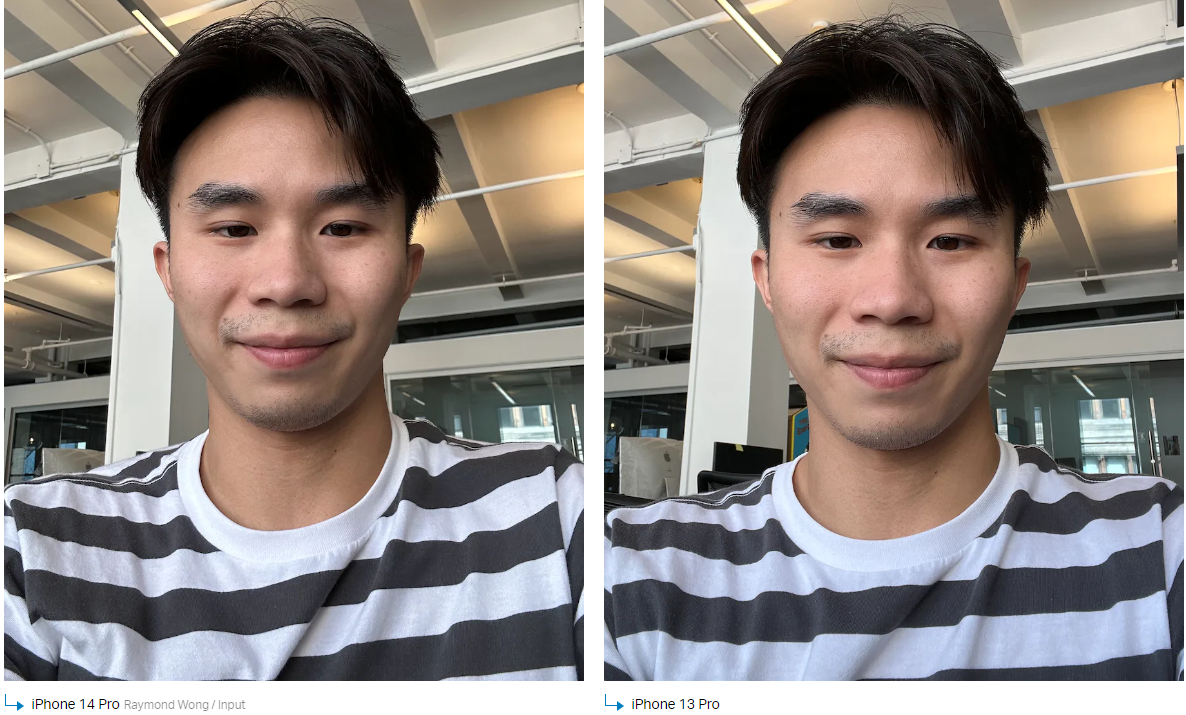 ◉ As for the video, iPhone 14 Pro captures the best videos in a smartphone. Android phones promote 8K video recording and video stabilization, but the iPhone is still the best for capturing video. We know the features that Apple brought to video shooting from cinematic mode or action and motion mode and how the quality of the captured videos was.

What do you think of these reviews? Tell us in the comments below.

the verge | the street | inputmag