Apple announced its financial results for the fourth fiscal quarter of the 2022 fiscal year, which corresponds to the third quarter of the year, ending on September 24, 2022, as the company recorded record revenues in the September quarter of $90.1 billion, an increase of 8% year on year, and quarterly profits with an increase 4% on an annual basis. Annual revenue was $394.3 billion, up 8% year-on-year, and annual earnings per share was $6.11, up 9% year-on-year. Exceeding analyst expectations. Here's the report in some detail.

◉ Revenues from all segments saw growth except for the iPad, as iPhone revenue increased 9.67% year-over-year to $42.63 billion, versus $43.21 billion estimated by analysts. 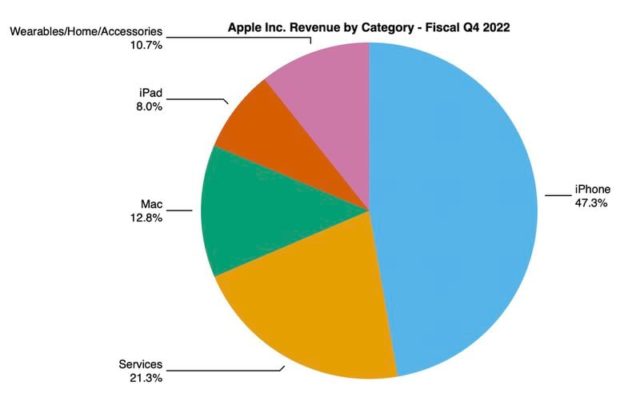 Apple's net profit for the quarter

◉ Net profit: The company reported net profit of $20.7 billion, or $1.29 per share. It is marginally higher than the net profit for the same period last year of $20.5 billion.

As for the quarterly guidance for the next quarter that ends in December, as usual, Apple did not provide any official guidance about it, and this quarter is Apple’s largest sales season for this year, and it is known that Apple has not provided guidance since 2020, citing uncertainty.

Tim Cook said supply issues had not significantly affected the company during this period, after several quarters in which supply shortages were hurting Apple sales.

What do you think of Apple's fourth fiscal quarter results? Do you expect more growth in the next quarter? And what are your estimates? Tell us in the comments.