The iOS 16 update will include a lot of new features such as adjustable messages and customizable lock screen, and there are many small features but it will improve the user experience to a large extent, and one of these features that caught our attention during the use of the beta version of iOS 16 is the ability to drag any element of the image And use it with any application. 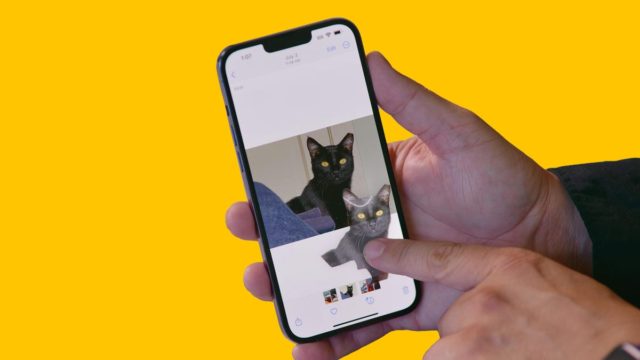 The feature isn't named, but here's how it works. You can tap and hold on a photo to separate an element of the photo, like a person, from the background. And if you hold down, you can then "lift" the item from the photo and drag it to another app to post, share, or create a photo collage, for example.

Technically, the click-and-lift feature is part of Visual Lookup, which first launched with iOS 15 and can identify things in your photos like plants, food, landmarks, and even pets. And in the iOS 16 update, Visual Lookup lets you lift that object from an image, PDF, and more by doing a tap and hold.

Robbie Walker, Apple's chief director of language and technology for Siri, showed off the new click-and-lift tool on an image of a French Bulldog, in which the dog was "cut" from the image and then dragged and dropped into the message text field. "It feels like magic," he said.

Apple sometimes overuses the word “magic,” but this tool sounds impressive, and Walker was quick to point out that this is due to advanced machine learning techniques, which have been improved by basic machine learning and a neural engine to 40 billion operations per second.

Knowing how much processing and machine learning it takes to get an object out of a picture is absolutely amazing, and oftentimes a powerful phone with revolutionary features is needed, and we think the tap and hold tool solves the problem of easily removing the background of an image, which may be on Least for some is a serious matter.

There may be similarities between this feature and other photos feature in the iOS 16 update, for example, on the lock screen, the photo editor separates the foreground theme from the background of the image used for your background, this makes lock screen elements such as time and date can be layered behind the object in Background image But in front of the image background, it makes it look like a magazine cover.

The new Visual Search feature was tested in the iOS 16 public beta, and the feature continues to amaze us with how fast and reliable it works.

If you want to install the iOS 16 trial version, all you have to do is register on the Apple website…

Then follow the trial installation instructions, but we would like to warn (The trial version is not stable yet, it consumes the battery heavily, and many applications do not work with it)

Have you downloaded the iOS 16 beta version? What do you think of this feature? Tell us in the comments.