A week full of news on the sidelines so don't miss it, new games using Interactive Island, problems installing apps after updating to iOS 16 and Apple fixing the problem, a bug on Apple's website (all products at $777), a standalone security update feature, and a developer on Xiaomi mimics Interactive Island, Steve Jobs' daughter mocking the iPhone 14, and other exciting news on the sidelines... 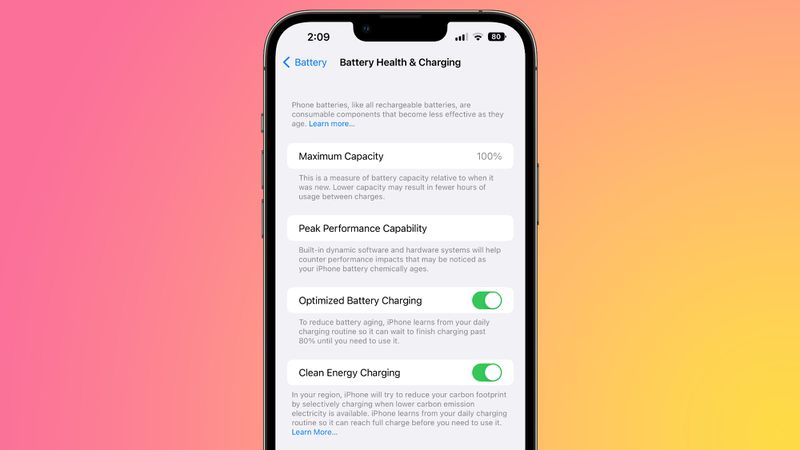 The beta version of iOS 16.1 that was made available to developers yesterday introduces a new clean energy charging feature that you may have heard about for the first time, designed to help reduce carbon emissions. 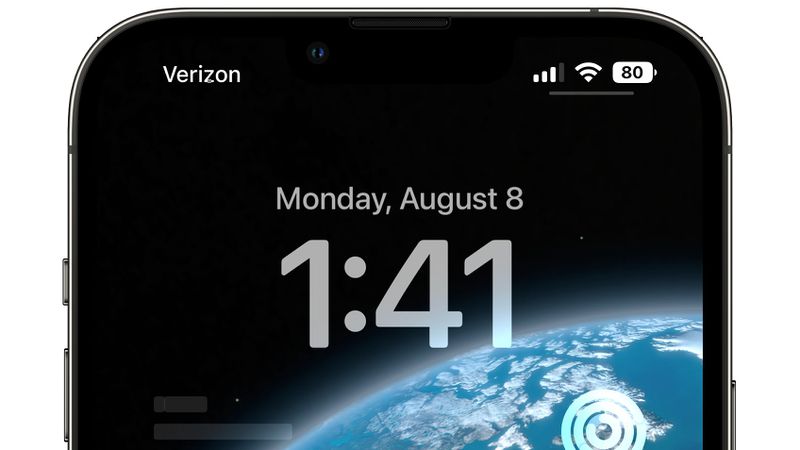 Battery percentage was not present on iPhone devices in iOS 15 due to the lack of space on both sides of the notch, but this issue was addressed in the design of iOS 16‌. At the launch of iOS 16, this feature did not include the iPhone 13 mini, iPhone 12 mini, iPhone XR, or iPhone 11, but according to multiple reports, all of these devices now support this feature. 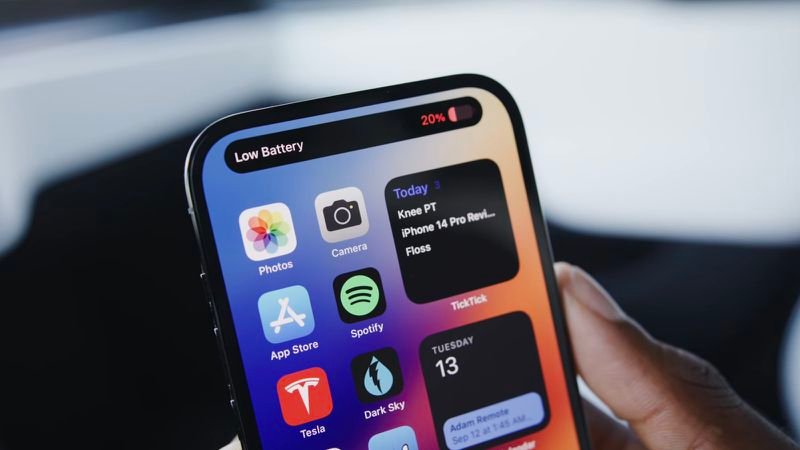 After a review of the iPhone 14 Pro and a look at what Interactive Island can offer, it turns out that it currently offers about 30 offers, including alerts for incoming phone calls, AirPods and other accessories that are connected, face authentication, Apple Pay, and AirDrop, AirPlay, Car keys in the Wallet app, Unlock iPhone with Apple Watch, Charging and low battery indicators, Silent mode, Various NFC interactions, Focus mode changes, Shortcuts, Airplane mode, SIM alerts, Find My, Recording indicators Audio, screen recording, and more. 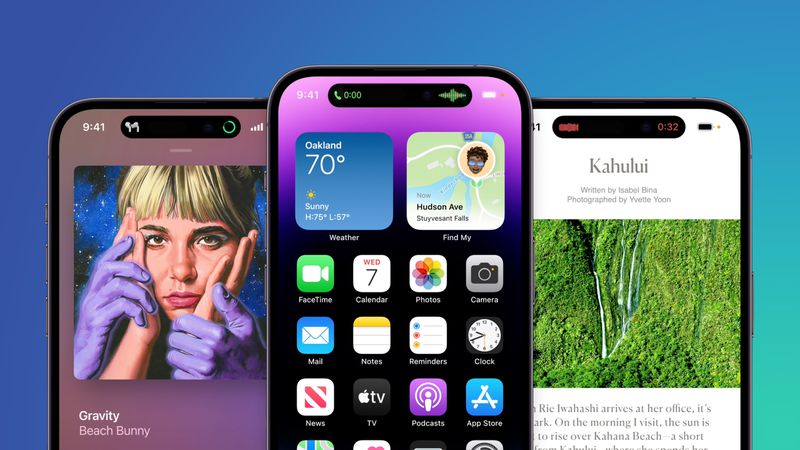 Notably, iPhone 14 Pro models no longer display an annoying low battery alert in the middle of the screen when remaining battery life drops to 20%, with or without a charger connected, Wall Street Journal journalist Joanna Stern confirmed. Instead, a low battery alert appears on the interactive island and requires no user intervention. 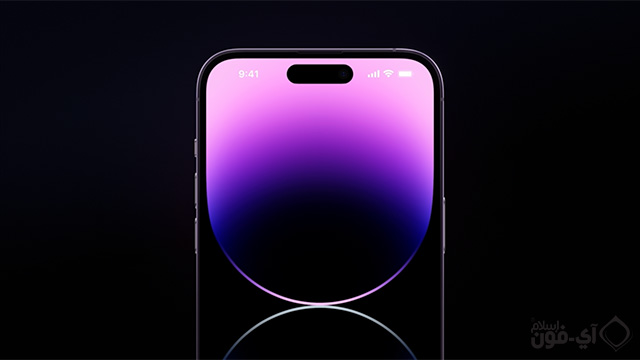 In the test, the iPhone 14 Pro Max consumed only 30% of the battery capacity in 5 hours while downloading apps, listening to music, and taking photos and videos.

He is said to have done well in terms of stamina. For example, after charging the battery to nearly 90% and then using the iPhone from 1 pm until 6 pm in downloading applications, playing audio, taking pictures and videos, the phone battery dropped to only 60%.

Regarding charging, tests have shown that the battery can be charged to only 42% from 0% in half an hour, unlike what Apple says, charging to 50% in less than 30 minutes. In comparison, the Samsung S22 Ultra got 58% in 30 minutes with a 25W charger, and the OnePlus 10 Pro got 93% and 55% in 15 minutes, benefiting from 65W charging speeds.

Compared to the iPhone 13 Pro Max, the iPhone 14 Pro Max actually has a slightly smaller battery, but it benefits from the new A16 Bionic chip and a more efficient, more advanced OLED display with a variable refresh rate of up to 1Hz, compared to 10Hz in Previous.

M3 chip and A17 Pro chip with improved 3nm technology 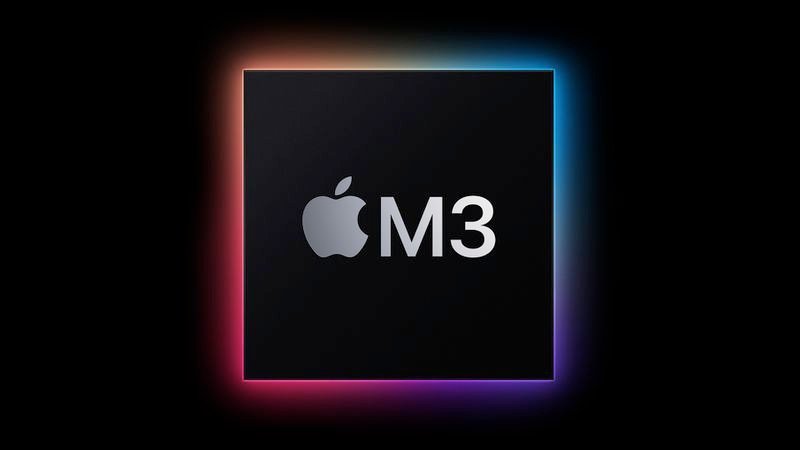 The future M3 chip for Mac and the A17 chip for iPhone 15 Pro models will be manufactured with 3nm technology, according to a new report. This means improved performance and energy efficiency compared to the first generation 3nm technology known as N3.

The report claims that Apple plans to use first-generation 3nm technology for some upcoming iPad chips. It is unclear which iPad models the report is referring to, as rumors indicate that Apple will update the iPad Pro next month with the M2 chip, which was manufactured with the second generation 5nm technology. A new iPad with an older A14 chip is also expected later this year. 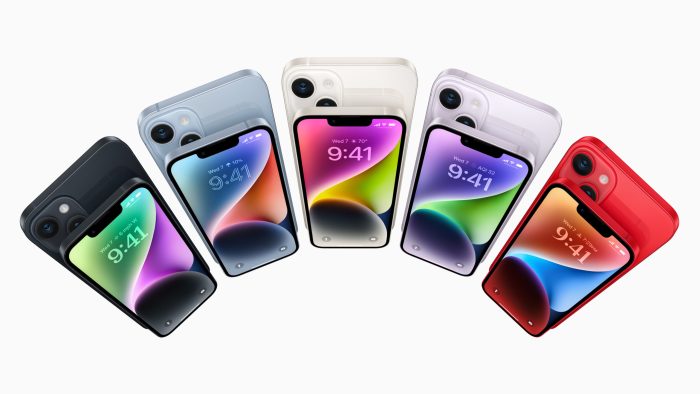 According to Apple, the iPhone 14 and iPhone 14 Pro models arriving in customers starting Friday will have a day one software update available with bug fixes that addresses an issue that could cause some images to appear soft when zoomed in in landscape orientation on iPhone 14 Pro Max. The update will be available when the iPhone launches on Friday.

Third-party app developers are experimenting with ways to take advantage of the iPhone's new capabilities. Apple allows third-party developers to create interactive island experiences, which may end up including games. And co-developer Kriss Smolka, developed apps like WaterLess و HabitMinder, concept of a game that uses the interactive island capabilities in a simple style similar to the Pong games.

Who has an iPhone 14 right now? Need to test this on device asap!

🏝️ Hit The Island – our game concept for iPhone 14 Pro, still laggy but it's turning out nice :) #iPhone14Pro #iOS16 pic.twitter.com/kWLU77gk6d

In this game you have to hit the island with the ball and thus score points, and it gets more difficult with the faster the ball you have to keep and not make it fall. He says I don't know if Apple will accept such games or not? What's your opinion? Isn't this insulting and belittling Al Jazeera? This is how we simply make it a joke and an entertaining game! Some may think that it may be damaged by many bangs.

Dark Sky weather app will be closed on January 1st 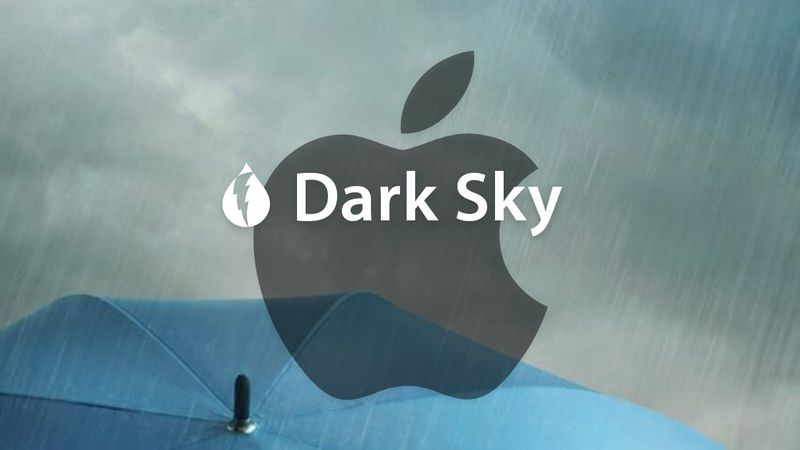 Dark Sky weather app on iOS reminds users that it will be shutting down and will no longer be supported starting January 1, 2023, as many of the app's features have been integrated into the new Weather app on iOS 16.

It is worth noting that Apple had purchased the Dark Sky app in March 2020 and since then has integrated many of its features directly into the weather app on the iPhone, iPad and Mac, in August of 2020, Apple closed the Dark Sky app for Android and said that Time it does not plan to end support for the iOS app.

Xiaomi developers are trying to imitate the interactive island

A developer has set out to recreate the iPhone 14 Pro interactive island experience on flagship Xiaomi smartphones by incorporating the aperture into an interactive and dynamic area of ​​the screen. The topic is currently being reviewed for approval by Xiaomi, according to its developer. Xiaomi reportedly rejected a previous attempt by a developer to bring Interactive Island to its devices. 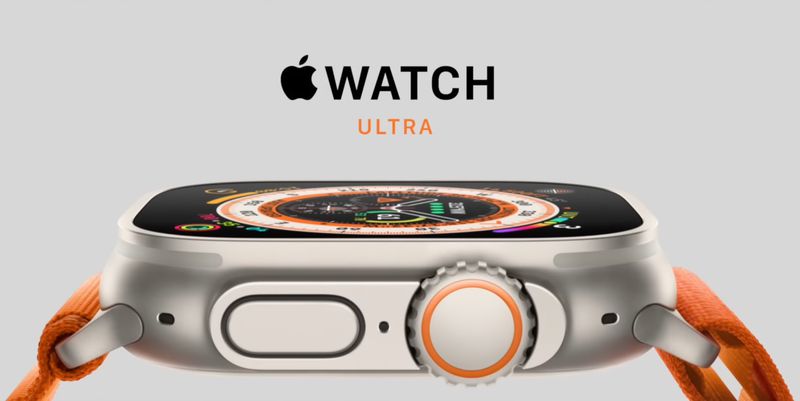 This is according to the newly disclosed specifications in the Chinese Certification Database. It reveals that the Apple Watch Ultra features a 542 mAh battery. The 8mm Apple Watch 45 features a 308mAh battery, which represents a 76% increase in the Ultra's battery size compared to other Apple Watches.

With the ‌Apple Watch Ultra‌, Apple says users can expect up to 36 hours of normal use and up to 60 hours with Low Power Mode enabled, providing the longest battery life ever in an Apple Watch. 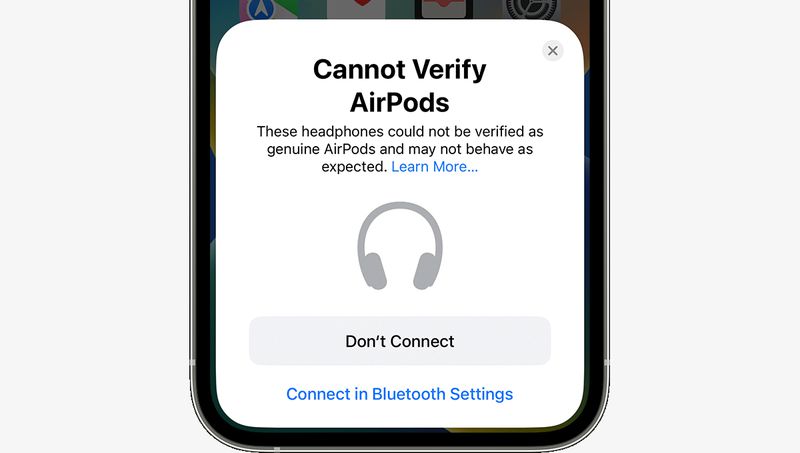 Starting with the iOS 16 update, users may see a "Cannot Verify AirPods" or "Cannot Verify AirPods" alert on iPhone if they try to connect fake AirPods. Apple shared more information about this alert in a new support document. The document states that unverified AirPods can still be connected to the iPhone, but they may not work as expected. 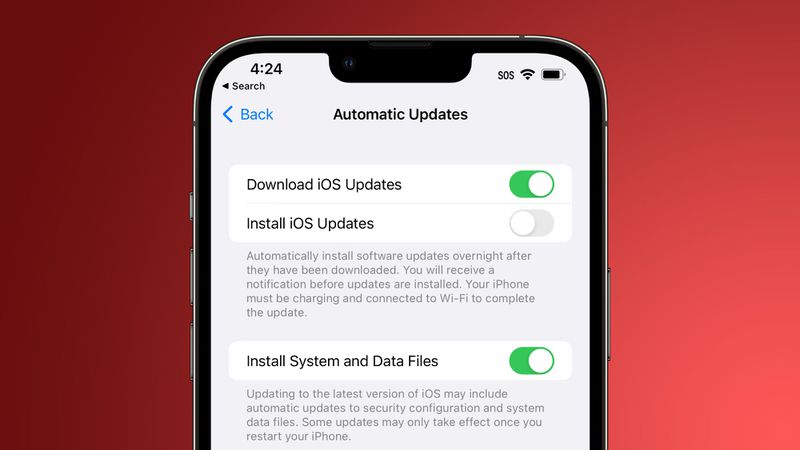 In iOS 16, Apple added a new Rapid Security Response feature that aims to make deploying security improvements to iPhone users faster and easier for the company without a full iOS update. By default, Quick Security Responses are installed automatically, but Apple has included a way to remove them.

In an updated support document shared, Apple says that you can remove the Quick Security Response from your device by going to Settings ~> General ~> About, tapping your iOS version, and then tapping Remove Security Update.

Apple says you can then reinstall the QRS at a later time, or wait for it to be installed permanently as part of a standard update. It's not clear why the RSR needs to be removed, but it's good that users have the option.

There is also a toggle to turn off automatic installation of quick security responses, which then allows them to be downloaded manually. 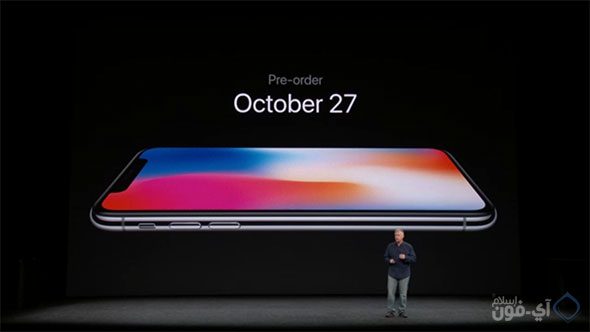 ◉ This week marks the fifth anniversary of the iPhone X, one of the biggest redesigns in the history of the iPhone, introducing the notch, face print, and a design language that has persisted over the past several years. 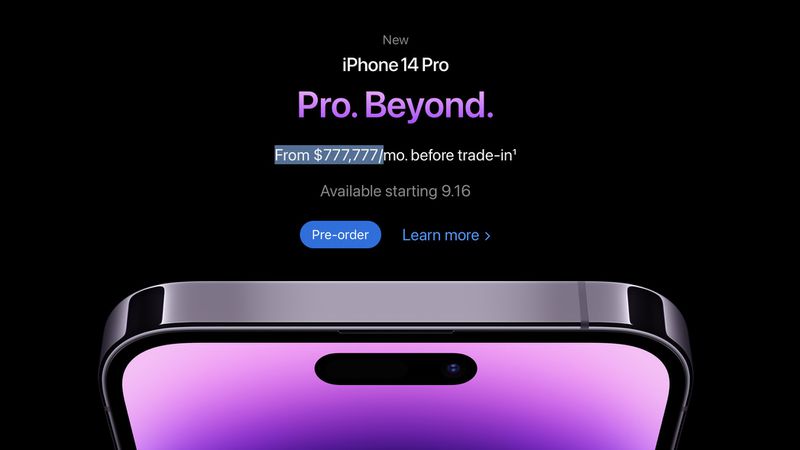 ◉ Some users who have updated found that they are unable to install the apps, when accepting the terms and conditions, it loads momentarily and then an error alert pops up “An error has occurred. Please try again later.” It could be because Apple's servers are stressed, Apple fixed the problem and the apps can now be downloaded without issues. 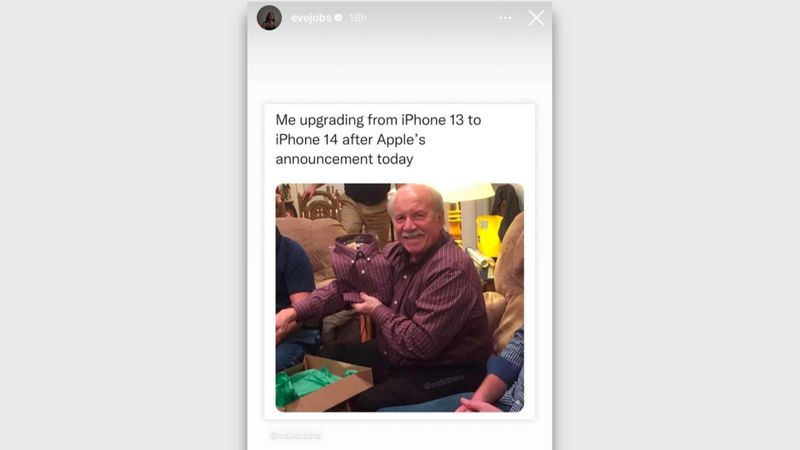