Apple has been working on its augmented reality (AR) glasses for years, and has already established it in iOS since then, and we talked in a previous article how Apple is working strongly in this field and how it will change the world again, this Link. In more than one previous report, we reviewed many leaks that were confirmed indirectly through patent documents describing the technologies used in this product. What is strengthened this matter strongly now, is that modern Apple devices, starting with the iPad Pro and the expected iPhone 12 models, contain a LiDAR sensor that is primarily aimed at augmented reality technology and not just photography. And it looks like Apple will do it again and take us to a much different technical future than we are.

Can Apple glasses for augmented reality replace the iPhone? 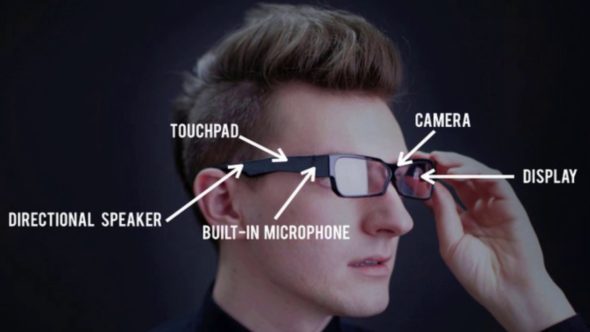 It is not difficult to imagine that augmented reality glasses will replace the iPhone or smartphones one day, and why not? It is possible that this time will come when we will not use smart phones, and augmented reality technology will be relied upon in one form or another. At least for now, these glasses will gradually reduce our interaction with phones. Through the glasses, you will be able to view the information and details contained on the iPhone and interact with it while it is still in your pocket or bag. And inevitably, this technology will develop further, as you may be able to make calls, calls, chats and voice searches through it. What is important is that this future is very close to what we expect.

If you've been following technology news closely, you might know John Prosser. He is the owner of the Front Page Tech YouTube channel and has become one of the most trusted channelers. Prosser shared the prices of the Samsung Galaxy S20 before it was announced, and provided the first news about the Pixel 5 phone, but these leaks have not been confirmed yet. He also made accurate leaks about the latest Apple iPhone SE and iPhone 12 phones.

A few weeks ago, Prosser stated that he has information about Apple's AR glasses, and said that he will share it in the near future. Indeed, Prosser has just submitted a huge report on these glasses. Among the specifications of Apple glasses:

◉ Prosser said, that the Apple glasses will look as if they were a normal pair of glasses, displaying the information created on the user's iPhone, and the glasses will contain a screen for each lens.

◉ At present, sunglasses do not work as “sunglasses” as the report says, but future versions are likely to work.

◉ The current model of Apple Glasses is made of plastic, and can be recharged wirelessly via a dedicated device.

◉ The report said the final design could be different, but they will still look more like standard glasses rather than look unnatural on your face.

◉ The glasses will contain a LiDAR sensor, and the data received from the iPhone or iPad LiDAR sensor will be used and analyzed, and this will lead to more workmanship.

◉ The user interface for Apple's glasses is called Starboard, something Prosser revealed a few weeks ago.

◉ The user will be able to control the Apple glasses through gestures either on it or in front of it.

The iPhone will process the data that will be displayed on the glasses, because it will be like the original Apple Watch, first release, when it comes to applications.

◉ AR glasses will also be able to read Apple's special QR codes. Interestingly, the leak revealed earlier this week about Apple's QR codes, which should arrive with the upcoming iOS 14. 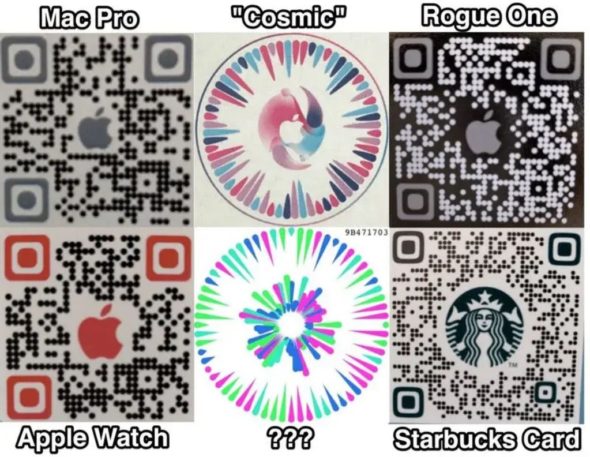 Apple's augmented reality glasses will reportedly be announced at this year's iPhone 12 launch event as "one more thing" and translated as "something else."

In view of the global health crisis due to the COVID-19 virus, the announcement of the glasses may be delayed until the first quarter of 2021. Prosser said that there is talk about postponing the iPhone 12 launch event to October. 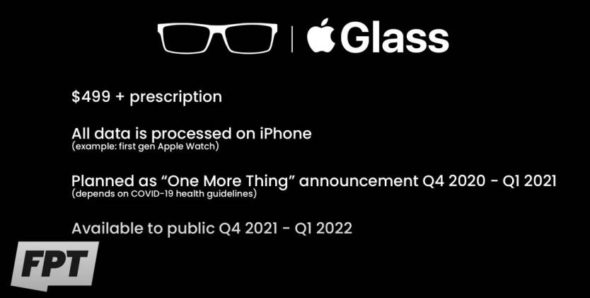 Regardless of when the Apple glasses are announced, they will not be available in stores until several months later, most likely in the fourth quarter of 2021.

As for the price of the glasses, it is said that they will come at a price of $ 499, excluding the prescription lenses, which is thus much cheaper than we imagined.

What do you think about Apple glasses with these specifications and price? Do you think that it will change the technology to another form in the near future? Let us know in the comments.