There are big updates to the Messages app in the iOS 16 update, with 24 new features, some of which were much needed. Some of the updates are aimed squarely at competition with other apps such as Messenger, Signal, Telegram and WhatsApp. Among the new features is the ability to edit messages after sending or even cancel sending them, a topic that has sparked a reaction since it appeared in beta versions, arguing that it can be used maliciously to confuse or harass people, but Apple has addressed this matter as it will come. In this article, we learn how to edit an iMessage after sending it.

We never thought Apple would do this, but starting now you'll be able to edit iMessages after they've been sent, a handy feature that can help you quickly correct misspellings and other wrong content. However, this feature has drawn criticism that people may misuse it, such as threats from some and then manipulating and editing the message many times, but Apple has made updates to the feature to address these issues.

You can only edit messages within 15 minutes of sending them, and you can edit the message up to five times within those 15 minutes. After five edits or 15 minutes, Edit will disappear from the Quick Actions menu. When editing, an “Edited” label will appear at the bottom of the message. You or the recipient can then click on “Editor” to view the history of the changes.

Message editing works with the iMessage app, so you can't correct anything in SMS conversations, and the feature works on iPadOS 16 and macOS 13 Ventura.

How to edit iMessages on iPhone or iPad

You have 15 minutes to edit an iMessage if you want to add, remove, or change something, and you can fix autocorrect errors, correct spelling errors, and more.

To review an iMessage sent on iOS 16 and iPadOS 16, press and hold the message to reveal the Quick Actions menu, then tap Edit. You can then enter your modifications, then click the check mark button to confirm as in the following image to your right. 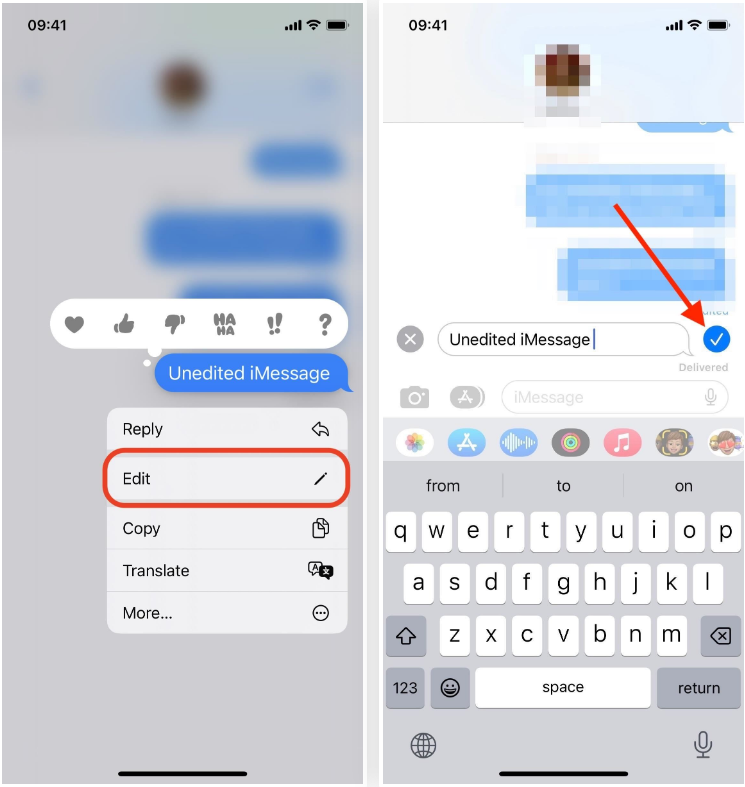 The edited message will be marked as 'edited' for all parties in the conversation. This way, both the sender and receiver can click on it to reveal the history of the changes.

However, since iMessages editing is a new feature in iOS 16 and iPadOS 16, recipients with older operating systems won't see the edits the same way. Instead, they will receive a new text for each modification that explains what has changed. 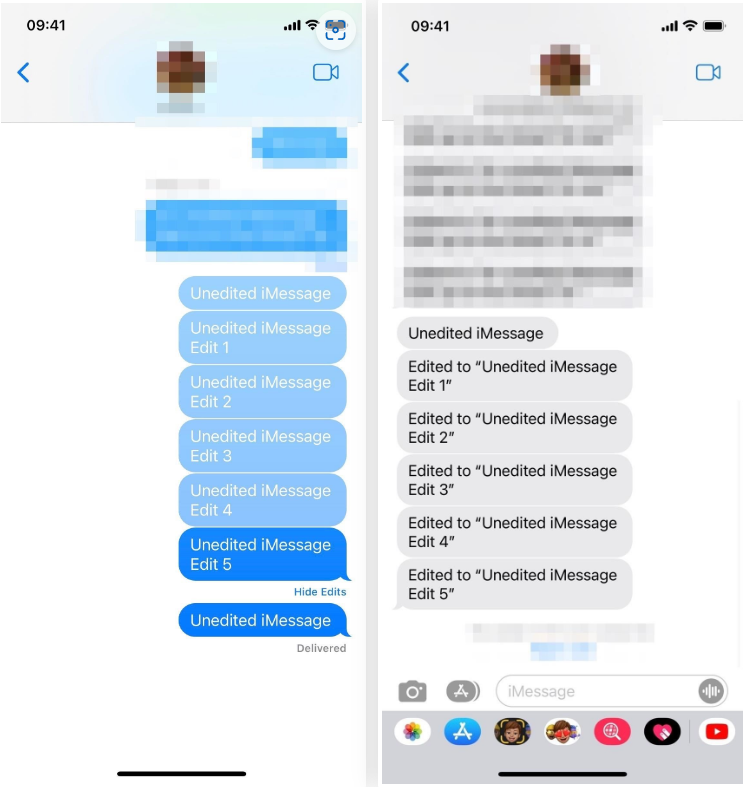 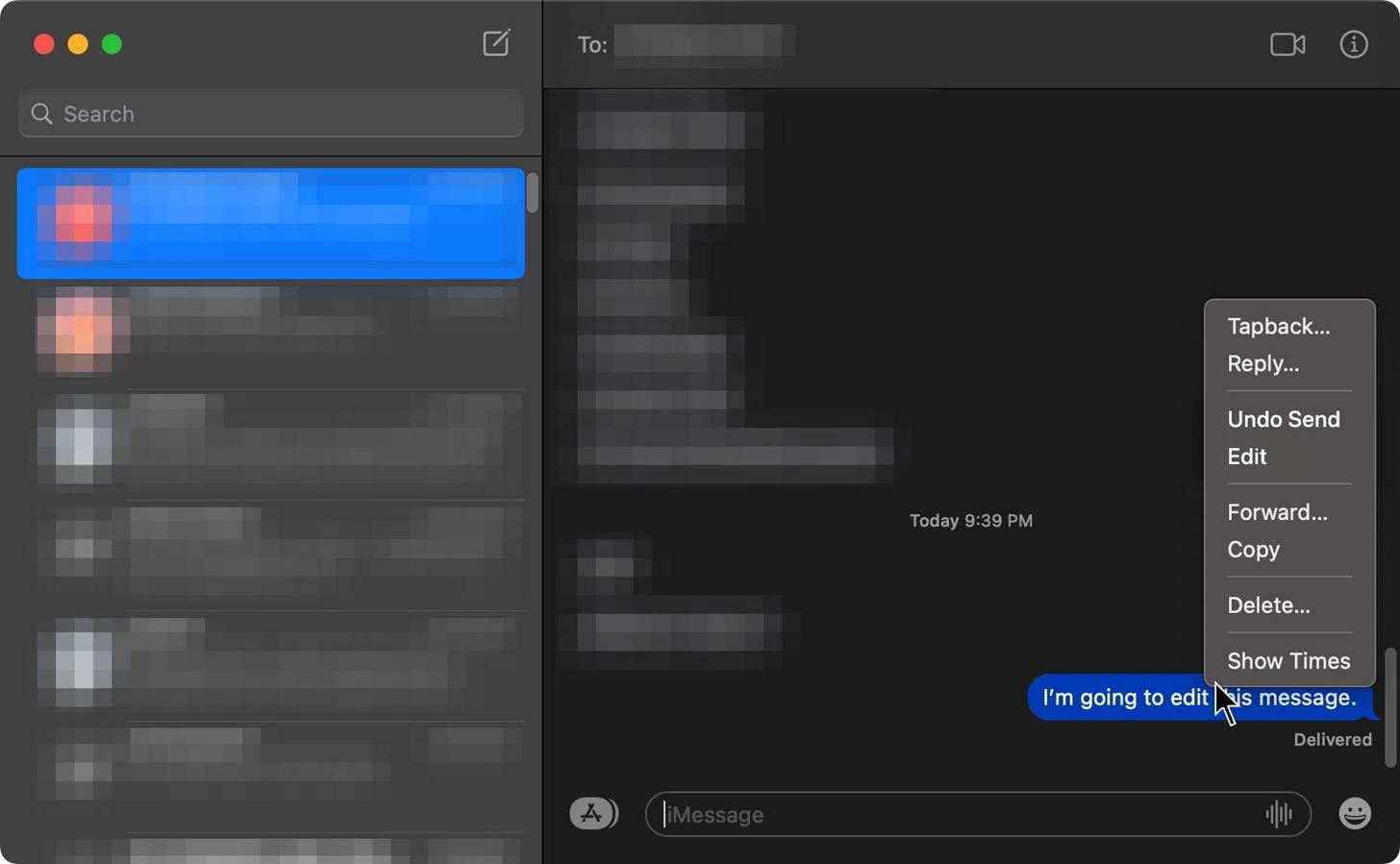 Starting with macOS 13 Ventura, you can also edit iMessages on your Mac. Use right-click, or Control-click, on the desired message to open the menu, then click Edit to adjust the text. And like iOS and iPadOS 16, you have 15 minutes to make up to five edits before the Edit button disappears. Recipients using macOS 12 Monterey and earlier will see each modification as a separate text showing the changes made.

Things to watch out for 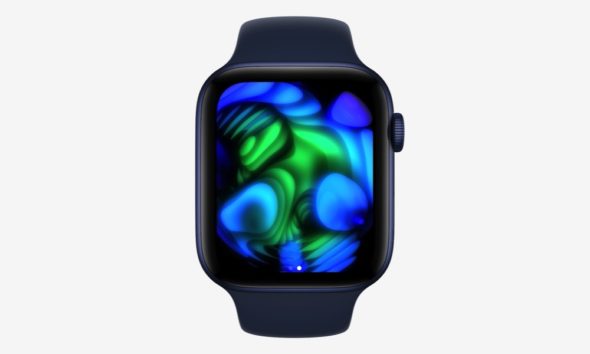 If you're used to texting on the go with your Apple Watch, unfortunately, the WatchOS 9 update doesn't allow you to edit messages sent in the same way on other Apple devices.

To edit an iMessage you send from your Apple Watch, you'll need to do so from your iPhone, iPad, or Mac within 15 minutes of sending it.

Keep in mind that the editing feature only works with iMessage conversations and cannot be applied to SMS or MMS messages. Once you send a plain text, document, or media, you cannot edit its content.

Apple also introduced another feature in iOS 16, iPadOS 16, and macOS 13 that lets you restore a recently sent iMessage within two minutes of sending it. This way, you can start over without being limited by the number of edits.

Undo sending iMessages after sending and deleting them

After sending an iMessage to someone or a group, you have up to 15 minutes to clear it to everyone in the thread (previously XNUMX minutes). To do so, tap and hold the message in the thread until the Quick Actions appear, then tap Undo Send. The message will disappear, and will be replaced with "No message sent". The recipient will see “[Your name] did not send a message.”
Have you tried the feature to edit messages on iOS 16? And how was the experience? Tell us in the comments.